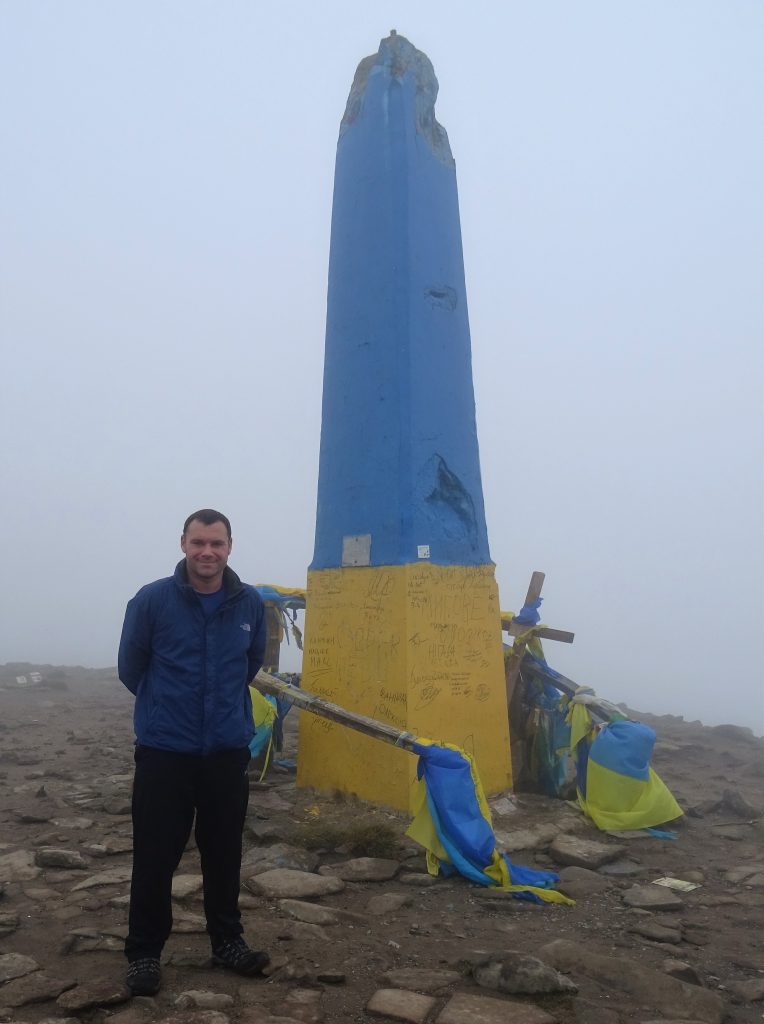 As with the majority of my potential high points, I’m always on the lookout for cheap flights to nearby airports which can potentially lower the cost of my trip considerably compared to having a preplanned list of specific high points to climb per year. Therefore the flight price usually dictates where I climb and travel to next.

For the Ukraine’s highest point however the flight price for the nearest airport Ivano Frankivsk remains expensive throughout the year. Having already had a cheap flight from Gdansk (Poland) to Ivano Frankivsk cancelled by Ukraine International Airlines the previous year, due to the airline closing the route a few weeks before I was due to depart.

Due to these factors I now needed to search for alternative options to reach the mountain by public transport. After looking into several possible ways to reach the mountain assisted by the always useful website Rome2rio.com. I decided the best option was to fly from Birmingham to Wroclaw (Poland) then from there to Lviv in the west of the Ukraine. From Lviv, there was a direct train (6hrs20m) to Vorokhta. Leaving me only a few hours walk to the trailhead. The price online converted to £6 each way in a sleeper cabin. The total price from Birmingham via Poland came in at under £50 compared to the £220 direct flight price to Ivano Frankivsk from London.

Upon arriving in Lviv I knew that I would not have long before the train left so I jumped on a bus at the airport and headed to the train station via a supermarket to pick up some supplies. From there I headed to a small window at the train station and showed the lady my phone which had my destination displayed in English and Ukrainian “Vorokhta”. She spoke no English and just shook her head as if to say no. Then she wrote down a time but it was for the night train, Not the one I wanted. She then pointed down the road and waved me off. Humm.. I had 40 minutes until the train was now due to depart and I still had no ticket feeling as if I was walking away from the ticket office for no reason. I felt like turning back at one point but continued to the end of the road as she had signalled.

On my left was a massive building which turned out to be the main train station, I must have been at the local departures. I dashed inside quickly only to see that every counter window had a queue of 6 or 7 people. I joined the back of one of them and the waiting and clock watching began.. After a very slow 20 minutes, I had finally made it to the front of the queue. I showed my phone as I had done before but thankfully this time the lady nodded, She then gesticulated if I wanted a blanket to which I declined she continued tapping the computer keys and finally wrote the price on a small piece of paper and slid it under the window.. 25UAH. I had been expecting over 220UAH (£6) So I looked at her somewhat confused. Due to the time being so tight and not wanting any confusion I gave her a 500UAH note. She looked at me, grabbed a handful of notes out of the till and shook her head. I remember running to the platform while thinking that’s way too cheap, 10 times less in fact than it had said on the internet. Perhaps she thought I didn’t want a sleeper cabin when I shook my head to say no blanket? Did she take that as no sleeper bed and cabin?

I located my carriage and showed my ticket to a man who was covered in coal leaning out of the doorway. He pointed down the carriage towards my seat number. I was pleased and thankful to find a long bench that was perfect to lie down on and get some sleep during the 6hr 20m journey. I figured out later that the 25UAH I paid for that journey had cost just £0.68! After several intermittent albeit comfortable sleeps along with a memorable visit to the on board toilet facilities which were simply repugnant, I finally arrived into Vorokhta around 22:00 and headed straight to the hotel I had reserved online only a few minutes walk from the train station.

The following morning I set off from the hotel for the 11km walk to get to the start of Hoverla. It was mostly road walking and I replenished my supplies from a shop I passed. As the road crept up hills in the countryside there were quite a few younger people jogging and doing shuttle runs up and down with their coaches nearby timing them. Not long after passing them a van pulled alongside me and offered me a lift to the ranger hut where I needed to register. That certainly helped to shave a few Kilometres off my walk. I entered the hut spoke to the warden, Signed in, Gave my details along with a rough plan of my route, I didn’t have to pay although I had read online that there was a fee.

I continued walking along the road for several Km before reaching the trailhead. There were quite a few little huts and shops selling food and souvenirs dotted around although many were closed as it was October. A sign indicated the route options and that it would take 2.5 – 3 hours from here to the summit. The start of the route was forested with a zip line and other outdoor activities which made good use of the area enabling many people to enjoy and explore the outdoors. The trail continued and had been cut through hundreds of tree roots that made the trail look really impressive. It then crossed a small river, turned right becoming steeper with the tree roots now becoming very useful steps.

At the top of that section the land opened up and I emerged out of the forest above the treeline with the track still well defined leading ahead. I pushed on and although the cloud base was low I still had a good view across the horizon with many of the other higher hills and mountain in the surrounding area still visible. The ground became less steep for a while and I could clearly see the route up the big lump in front that I knew was the start of Hoverla. The trail started becoming more and more narrow as the vegetation grew taller around me. The terrain also became steeper until the vegetation finally gave way to large rocks and boulders that certainly aided the climb. The views from here were great, although I knew that wouldn’t last long as I was just below the cloud base and still had quite a way to go.

I continued, The visibility deteriorated and I once again had that familiar ingrained feeling acquired from many years of plodding on through the mist and rain in the Welsh mountains as a boy. More plodding onwards and upwards until I spotted the blue and yellow obelisk that signified another high point was within reach.

After spending 10 minutes taking photos and videos along with talking to a Ukrainian man on the summit culminating in exchanging several Oreo’s for a handful of local nuts. I decided it was time to head back as there was no view and I still had a long way to get back to the train station for the 02:11 train early the next morning. The descent was quick and after reemerging out of the clouds the views became extensive with many photos taken. I followed the same route back through the forest stopping off at one of the huts by the trailhead to pick up a drink along with some local food before starting the long road walk back to the train station.

As my train wasn’t until 02:11 the following morning I had many hours in hand and was not sure whether to speed up and head back to the hotel from last night and spend 4 or 5 hours there or slow the pace and wait on the platform? I continued on for a few Km until a van pulled up alongside me. It was the same people who had given me a lift earlier. They mentioned that they lived in Vorokhta, Perfect! I laughed while shaking my head, Jumped in, Shook hands and we set off. The van was full of mushrooms they had been picking to sell at a local market. (Very popular, the streets of Lviv were full of mushroom sellers on my way back)

It seemed to take quite a while to get to Vorokhta but I was grateful not to be walking. Once I had been dropped off and said thank you I headed straight back to the hotel from last night where thankfully there was a room available. A few hours of relaxing watching Ukrainian TV and using the WiFi and it was time to catch the train back to Lviv. The ticket was 30UAH (£0.80) this time, still a crazy price for a 6hr 20m train journey.

A man joined my cabin halfway back, I had unfortunately already the toilet which somehow was worse than before. But to my surprise just before we arrived into Lviv he took his empty pop bottle and headed to the toilet. I thought there is no way he is going to refill that with train water? I had to hold my breath the whole time earlier let alone obtain water from in there? But he sure did.. he returned and placed the bottle on the table between us. He sipped at the cloudy yellow discoloured water, We were 15 mins away from Lviv and I was thirsty myself but surely he could and should have waited 15 minutes. I grabbed some food and had a wander around the city before walking the short distance to the airport then flew home once again via Wroclaw.