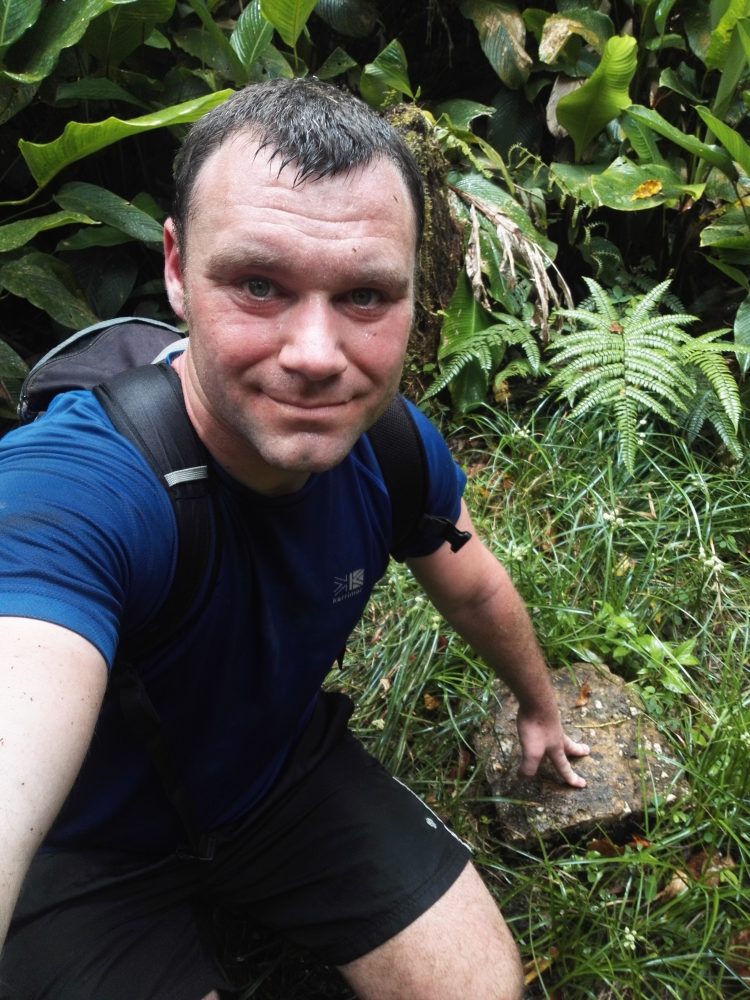 Trinidad and Tobago was the third country of a multi-country high point adventure where I had already successfully stood on the highest point in Barbados and Saint Vincent and the Grenadines a few days earlier. I caught a pre-booked shuttle to my hotel to spend the rest of the day relaxing as I had an onward flight to Grenada at 22:00 the following evening so had planned for an early start allowing myself enough time to get to the trailhead in the mountains, climb through the jungle to the highest point of the country and then have time to spare to pick my spare gear up from the hotel before heading to the airport.

After a relaxing evening and a good nights sleep, I headed early down to the reception desk to check out and ask them to keep some of my gear until this evening save carrying it to the high point. I looked on Uber on my phone as they have extensive coverage in Trinidad and from my research beforehand knew it would be a lot cheaper than a taxi. Unfortunately, there was nobody available as it was 07:00. I asked reception and all three of us tried but had no joy on any one of our phones. After 15 minutes of faffing another person who worked at the hotel came over after finishing his night shift and said the person who was taking him home is also an Uber driver and he would as her if she would be available. She agreed and I was happy with the price so I just had to wait for the man to be dropped home before she would return for me in 20 minutes and then drive me to Brasso Seco, where she would wait for 3 hours before driving me back to the hotel. Perfect!

After waiting 30 minutes I started getting concerned in case she had changed her mind or thought it too much hassle. Thankfully after speaking to the receptionist who was able to contact her, she turned up after around an hour or so and we soon set off towards the mountains. The road became quite bumpy as we ascended through villages that became further and further apart before having to turn right on a track with a great many potholes causing our progress to become slow as we weaved around the large holes in the road. Upon reaching Brasso Seco the last village on the road. I got out of the car and told the driver that I would meet her back here in a very optimistic 3 hours for the journey back. She said she would wait there and have a look around the village in the meantime as it was too far and the road in too poor of a condition to head home and return on.

The trail started off well defined with possible 4 wheel drive tracks which petered off as it wound higher into the hillside. The canopy became more dense with the now familiar noises of the jungle being heard from all directions. I was aware that I was certainly already against the clock, It was very warm and humid with sweat already dripping off my chin but I needed to keep a fast pace to make sure I made it to the summit and back in time for the Uber driver. Otherwise, I could be stranded in Brasso Seco with no time to get back to the hotel to pick up my gear before the shuttle back to the airport for my flight to Grenada.

I saw two local men ahead who were drinking from a small stream, they told me the trail ahead is not passable and pointed in another direction. They set off in that direction so I followed. I asked again but there English was poor but nodded and said Cerro Aripo while pointing up. I continued onwards but they soon took a separate trail where they were working and picking fruit from trees into baskets.. I had been referring to my GPS along the detour and from what I could see was there wasn’t any obvious route from where I was in the direction of the summit so I decided as my original path was now about 1 km away and a few hundred meters higher than where I was I would just head in a straight line uphill until I reached it. The terrain was steep and weaved through lots of fruit-bearing trees which had wires interlaced between them, I couldn’t see the ground due to vegetation so had to be cautious of not treading on or disturbing any of the more interesting creatures including snakes and spiders (Tarantulas) that reside in the jungle areas. This made the going more difficult, but I persisted before reaching the very overgrown trail marked on my GPS. The trail certainly doesn’t have much footfall and completely overgrown but I was pleased to be back on my original track.

I continued to ascend until reaching the ridge, From there I turned left and continued pushing through the dense vegetation. The terrain dropped 30m or 40m before climbing again adding time onto my ascent. The going was tough and I was already running behind schedule to get back for the driver. I Ascended several more times before finally reaching a small clearing and the small square survey block that signified the highest point of Trinidad and Tobago. I had made it, I took the usual photos and videos and headed a few hundred meters to another point that is of similar height as the official high point. I had less than 45 mins to get back and knowing how the terrain along the ridge was time-consuming I needed another option.

I referred to my GPS and noticed a steep slope that should just about be possible to descend. I retraced my steps a short way along the ridge through the dense vegetation aiming for the point on the ridge where I could descend when I suddenly felt a sharp pain in the top of my left arm. I looked and thee were two small dots close together that had started bleeding. Within a few seconds, the top of my arm felt tingly turning into a painful numbness that continued to spread down towards my wrist. I quickly sucked the bite to try and withdraw any poison and spat out the collected saliva. I can only assume I had been bitten by a spider that I hadn’t noticed while moving the large leaves out of the way with my arms. The problem now was, I’m still on the summit ridge with 30 minutes left until the time I told the driver and I needed to use both arms to swing and support my steep descent. The pain was bearable, but my arm was numb and not providing much help as I started my descent down through the steep slope. It turns out it’s surprisingly difficult to slide down a slope with only one hand to grab onto the nearest tree and to then have to support yourself with it also. The descent seemed unending and my good arm was taking the full force of my weight over and over. By now It was already past the agreed time and I would be over an hour late at this rate. I looked again at my route and decided that from where I was it would be possible to reach a 4×4 track that leads to the main road in the village. The downside is it would add on 2 km than if I headed straight down as I had been. But if I jogged the entire way once reaching the track I could make up quite a bit of time.

I jogged until I reach the road I turned left and the driver was standing there talking to a man on the side of the road.. Fantastic! All that effort had been worth it. I walked over to her and said I would just need a few minutes to cool down and she said no problem and continued walking with the man. I sat on the side of the road took off my boots and socks and relaxed. A few minutes later two young women walked past and said hi and asked what I was doing there. I said I had just climbed the highest mountain in Trinidad and about my 100 country high points adventures. The one woman asked with a kind of puzzled look on her face, “Where are you from?” I said, “Wolverhampton why?” She said no way, I’m from Wolverhampton.. There we were in a small village in the mountains of Trinidad and I bump into someone who lives in the same city as I do.. Weird! The woman had been there for several months studying the local ecosystem and recommended a few locally source goods I should try while in Trinidad.

My Uber driver return and I brought a few drinks from a local shop before setting off on the drive back to the hotel. She really enjoyed spending a few hours in Brasso Seco, She had never been before and had already planned a return trip over the coming weeks. I arrived back to the hotel and collected the rest of my gear and mentioned the bite on my arm to the receptionist who wasn’t overly helpful really, so I just applied more antiseptic cream that I had brought with me. I had just enough spare time to clean the mud off my boots before catching the free shuttle to the airport for the 22:00 flight to Grenada.