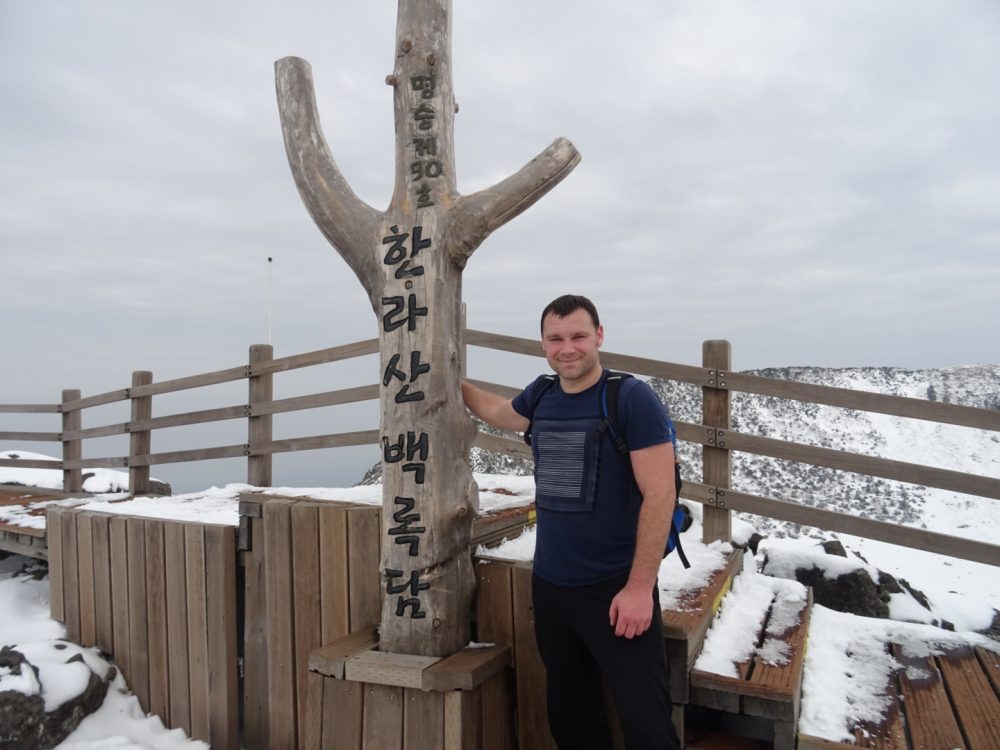 The final high point on my Asian trip was in South Korea. I flew from Hanoi to Seoul and then from there to the island of Jeju where the highest point in South Korea is located. I was looking forward to this one as it was more gradual and scenic and wound down my trip nicely. The South Koreans love making things easy for people in every facet of life with lots of unique gadgets and gizmos everywhere and the path to Halla san was no exception. It was very well defined and well maintained with wooden staging and steps along the way.

I caught the bus from Jeju bus station at 06:20 and by 07:10 I was already at the trailhead at Seongpanak. It would be around 19km round trip with a height gain of ~1250m so quite comfortable. After an hour of walking it was getting a bit icy underfoot with local climbers putting crampons on. As I climbed higher the ice turned to snow which by the time I had been walking for a few hours was a good foot deep but this made for comfortable walking.

The weather was overcast but just right for walking in a t-shirt which probably sounds odd but I felt at a perfect temperature due to the physical exertion. I think it came as a bit of a surprise to the locals too who were all wearing thick coats, gloves and woolly hats and then to see me in just a T-shirt they would say something in Korean I imagine to the effect of “look at that nutter”. I exchanged pleasantries with nearly everyone though! Lovely people.

I was feeling good and marched onwards and upwards towards the summit. After taking the obligatory photos and videos at the top I jogged back down the same way as I had ascended and at this quicker pace it wasn’t long before I was back at the trailhead. Number 46 crossed off the list and mission complete for this trip leaving a free day in Seoul to explore the capital city before returning home.