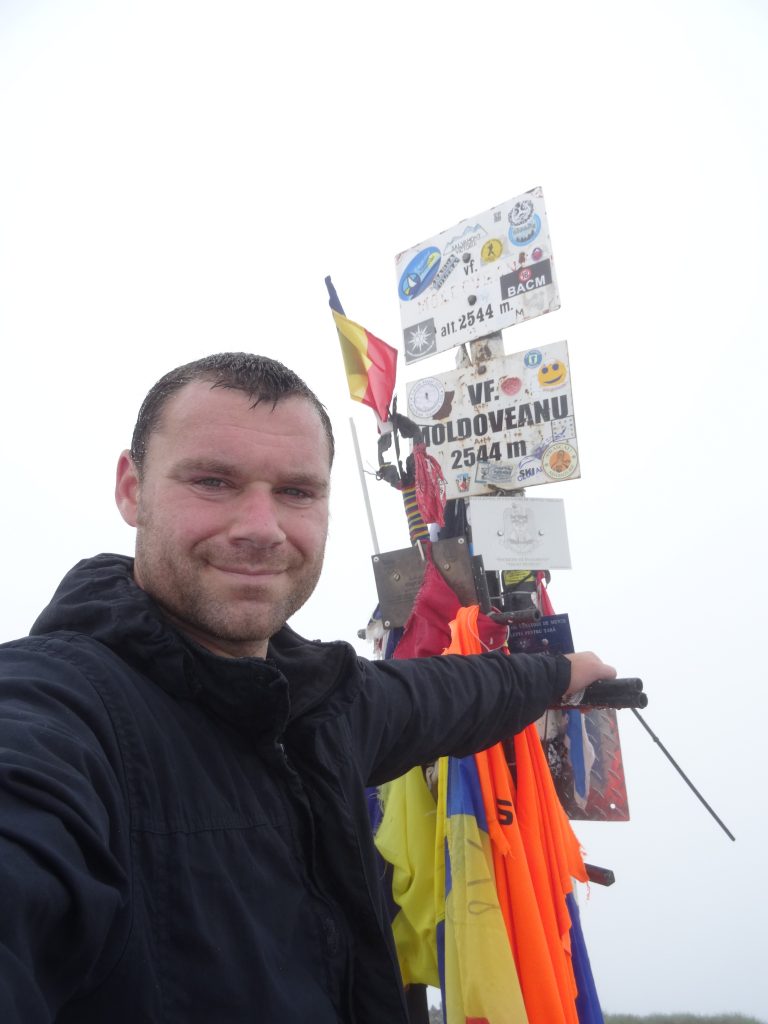 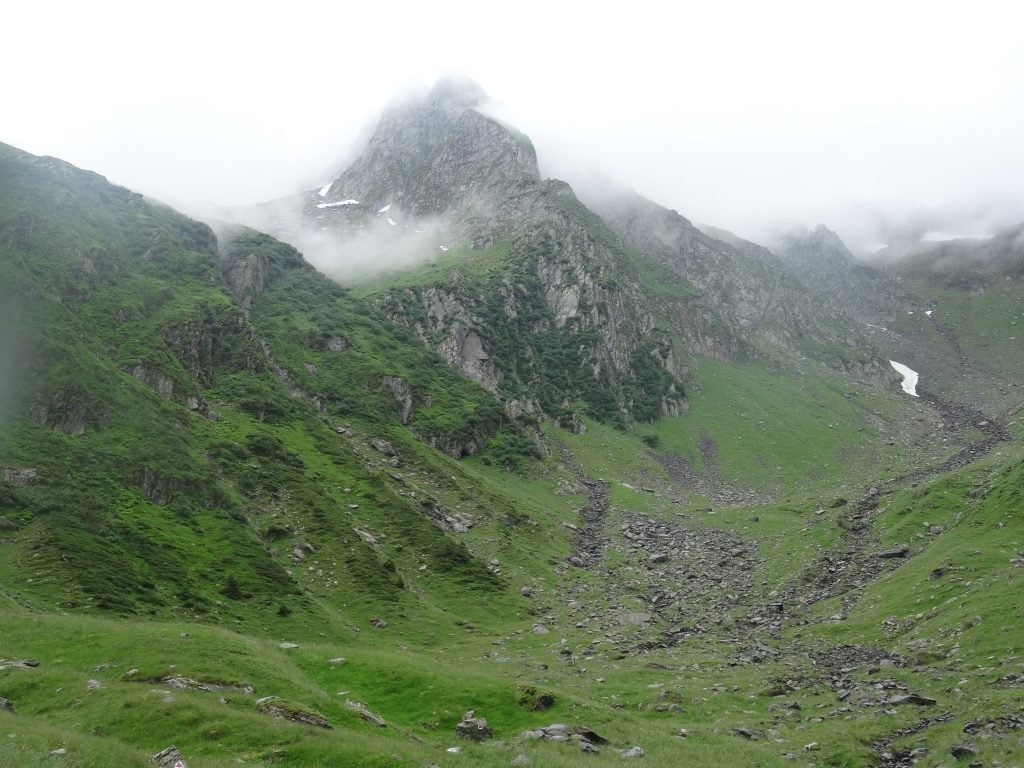 I was extremely motivated to climb Moldoveanu in Romania having cancelled a trip to climb it a few weeks earlier due to a close family member being in hospital. The weather forecast on Mountain-forecast.com (my go-to mountain weather site) was showing heavy rain for the whole period while I would be in Romania and rain it did!

I flew to Sibiu a city in Transylvania and spent the rest of the day and evening there sightseeing and stocking up on food and drink for the climb. I do a great deal of research beforehand and from many reports this was a 2-3 day round trip from the starting point near the small town of Victoria. But I intended to do it in one long day ~10-12 hours.

I knew I would be able to get an early train to Ucea de Jos and there were listings online showing bus connections between there and Victoria.. perfect I thought! I booked a cheap hotel near the start point 6 miles further on from Victoria in Viștișoara, as close as I could get to the start and of course end of the climb as I knew it would be a long one. I was woken up several times throughout the night due to the heavy rain and thunder, not good I remember thinking. It was absolutely hammering down when I set off that morning at around 04:15 to catch the first train and was already soaked during the 10 minute dash to the train station.. Great start!

Having dried off somewhat on the train journey I headed out of the station and down a small lane which crossed a main road and found the bus stop, I sat in there as it was still raining heavily and waited for the bus which according to the timetable was due in 15 minutes. The bus didn’t turn up and there wasn’t one due over the next few hours. I decided not to wait in case that also was a no-show. I ended up walking the 15 miles (5 hours) to the start of the mountain via Victoria. Totally saturated I was finally at the start, it was already 10:30 with a sign saying 7 hours from that point to the top and a 10 – 12 hour average time to the top and back to that point! I shook my head, exhaled and set off.

The start of the route was mainly under trees which sheltered me from the persistent rain, I ascended passed several houses but could hear loud aggressive barking around the corner where the trail headed. As I turned the corner two large dogs were running towards me barking. I shouted “Wheyy” and flailed my arms out to which they stopped running but continued barking. As I crabbed to the right hand side of the narrow track to try and pass they edged forward. Two men came out of the house at this point called the dogs then shouted something in Romanian while raising his hand and they scarpered! The two men asked where I was heading and said it was too late to be heading up there let alone the fact the weather was atrocious and of course even worse higher up. I reassured them that I had climbed many mountains and also had suitable clothing for the conditions to which they smiled disbelievingly and I continued.

Climbing through woodlands and along ridges, I came to a river which according to the map on my phone I needed to cross. The rain was still heavy, I tentatively started crossing the bridge but due to the angle and moss build up I fell on my arse! I turned onto all fours and crawled across the slippery bridge! Unfortunately, that turned out to be the easiest of the bridges I needed to cross! Eight river crossings in total were required and not all were straightforward!

I continued on and after a few hours I reached the top of the valley and the land opened up in front of me. It was misty and cold but due to the strong wind blowing across the plateau it sporadically gave me the occasional glimpse of forested hill slopes and one or two mountain tops. The inclement weather disagreed with my camera at this point and it was a complete faff constantly trying to dry the screen and lens with wet hands and of course wet clothes.

Today had already reconfirmed one thing though.. That I really need to re-waterproof my Rab trousers and jacket! Although thankfully they were still keeping me warm. The route crossed the river for the last time and zigzagged upwards for a few kilometres which weren’t overly difficult. I took a break and replenished when I reached the saddle on top of the ridge which was where I needed to turn right and the real mountain started.

It was boulder strewn and icy, Walking on ice and snow is fine but the next hour was spent at the freeze-thaw level where it’s cold enough for snow and ice but it turns to slush during the day.. Super slippy!

I reached a small snowfield which I could see had been melting and as I was on a precarious ridge I tried to cross. The first few tentative steps were fine then I went in straight to my knee. The snowfield extended around 500m and I knew without walking poles, crampons and luck it wouldn’t be possible. I spend a while considering my options before descending around the periphery of the snow and finally found a way to slip around. I decided to head straight back up to the top of the ridge as this would avoid any more snowfields, I reached the summit of Varful Vistea Mare (2527m) and continued along the narrow ridge towards Moldoveanu.

The ridge suddenly dropped and I could see a small gully filled with snow and ice along with a fixed rope (chain) over the other side leading up a steep rocky outcrop. The drop either side was considerable and I knew one false move here would leave me in a lot of trouble especially as I hadn’t seen anyone else all day. After successfully negotiating the steep section I continued on along the ridge and after several false little summits out of the mist appeared the Romanian flag, I had made it! The highest point in Romania Moldoveanu (2544m).

Of course, I was only half way and time was pressing on, I took pictures and videos and quickly headed back taking care descending the steeper section and fixed ropes but found it enjoyable although the icy chain and scrambling had caused my hands to become freezing cold and wet. I descended a similar route to which I climbed, under the snowfield and back down towards the plateau. It was starting to get dull, the thick cloud still lingering overhead and rain persistent as it had been all day. I pushed on fully aware there were 8 bridges ahead and the narrow jungle-esque trails high above the river which if dark would be a hassle at best.

I jogged where I could, getting as far down as possible as the light diminished minute by minute, the canopy reducing it furthermore. I crossed the first few rivers without incident on all fours if needed as it was so slippy, I noticed the river was significantly higher than it had been on the way up 7 or 8 hours prior! “Humm.. I wonder how the other crossings are”? I thought. The short answer is they were a faff! The one in the picture earlier even more so as it led straight into the drink anyway. The current and water depth had both increased leading me to take my boots and socks off to cross, By this point, it wasn’t possible to get any wetter so it wasn’t a problem although the water was freezing cold.

The last hour and a half I spent trudging in darkness but I had managed to pass the crossings and made it to the track so all good. I was really looking forward to getting to the hotel and taking my saturated clothes off that had been clinging to me for 16+ hours.

It had taken me around 10 hours by the time I finally made it back to the sign and was now pitch black. My hotel was in a town a few miles away.. No problem! Unfortunately, there were no lights and the town sparse without any visible road signs. All I could see in my phones torchlight were several cows and dogs wandering around the streets. I’d had enough to be honest and turned my attention to getting back to Sibiu knowing there was a train the next morning.

The 6 mile walk to Victoria by torchlight was met with dogs barking and jumping at fences whenever I passed properties. The walk itself was a painful one as chafing had taken over and with me walking like Bruce Wayne, I would have been a right sight when I finally shuffled into Victoria! Although truth be told it was 23:00 and there was no-one to be seen.

I found a bus stop at the outer limits of the town, finally sat down and decided that was it for the day. I had been successful and 19 hours was enough. I changed my socks but needed the spare clothes in my bag to fly home in tomorrow as it was still raining along with needing to walk the 9 miles in the morning to the train station potentially still in the rain. It was a rough nights sleep due to waking up every so often still wet and cold. I eventually woke up to the sight of several Romanian men and women standing looking at me. It was still dark and they turned out to be heading to work on a coach that picked them up at 04:00. I looked at my phone, it was 03:50.

By 05:00 I had dozed a few more times and my focus turned towards getting to the train station 9 miles away. After a few hours, no buses came and I realised the timetable was simply useless. A man approached and asked me something in Romanian and pointed at the timetable and shook his head. I knew exactly what he meant! “It’s crap!” I nodded in agreement. It was getting light by now and he stood there trying to flag a car down, I knew this approach was to be my only option to get to the train station aside from a long and painful walk. He was unsuccessful for a good 30 mins when all of a sudden a truck pulled in and I just went for it! I gave the driver a thumbs up and I was in! He spoke English and gave me a lift to the train station.. Success!

It was a long wet trip. The comfort level throughout was nil, but another high point off the list.. #29 was a tough one!