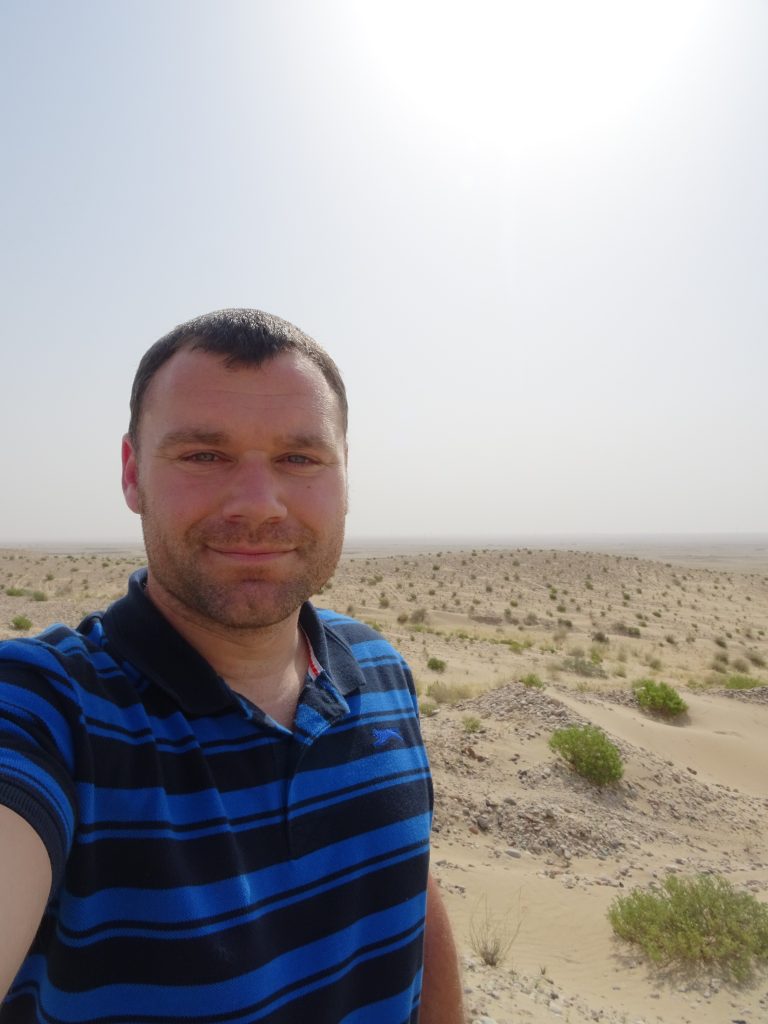 After another short flight this time from Bahrain to Qatar and an evening in the airport, My plan was to use the Uber taxi service to drive me the 120km from the airport to a few kilometres away from the highest point in Qatar, Al Galail near the border with Saudi Arabia.

This area is a military zone which is used for training and it has a police presence by the main road prohibiting people from continuing when in use. The is also an outpost about 1km from the actual highest point so if this was manned it would also be problematic. Another one that could potentially out of my hands whether I reach the highest point.

My thought was to have an early start so I could get to the high point before any police or military get there. It’s a few hours drive and apart from one road that runs to the Saudi Arabia border, there is nothing but desert for miles around.

I was approached in the early hours of the morning at the airport by a man touting for taxi business. I don’t usually entertain such people but thought I wonder how much I could knock him down too as even Uber is expensive in Qatar and it’s a long drive.

I told him my plan and how much I was going to pay Uber.. Well.. Half lets say lol and he said that would be fine. I thought OK then and went with him to his new car which was surprisingly quite smart. He turned out to be an Indian who runs his own small taxi service. He didn’t know anything about where I wanted to go or why or what I was doing but of course he was happy with the money he would receive.

It was before 06:00 and after driving for a short while he said “food” and we pulled into a small kind of roadside service station and he topped up with petrol and ate while I brought a few drinks for the journey. Perfect!

After having his breakfast and we had been driving for 15 minutes to which we were totally going my phone’s maps and he kept saying here? here? for the turnings. I noticed something strange. He was lurching towards the windscreen and shaking his head. Humm that’s odd I thought and I asked if he was OK? He seemed kind of startled said “Yes, good!” I wasn’t convinced and after a few more times it was evident he was falling asleep while on this motorway with massive oncoming lorries a few feet on the other side of the road. This isn’t a good sign I remember thinking as we had well over 3 hours driving ahead.

I started talking loud and tried to keep him alert and when I saw his head drop I would say something louder. I said your falling asleep to which he said he was alright but only had 1 hr sleep last night. We were heading further and further away from the city and I had a driver who inevitably would get more and more tired!

After veering onto the other side of the road a few times we reached the turning for the road to Saudi Arabia. After a very uncomfortable 30 min drive we had finally reached the sign for Al Galail and turned off the main road and he stopped the taxi as it was a rocky track. I said I will be an hour and it’s best for him to get some sleep ready for the 2 hour drive back which he agreed with.

I walked for about 1km and looked back as I had been a few times just in case the police or the military were around and I saw a person standing over the taxi. I was only 2km to the top so I started walking faster. I could hear a car crunching on the loose rock getting closer. I’m not gonna frigging make it I thought. I waited until the car was almost alongside me and looked, It was the taxi driver of all people.

I smiled and said what are you doing? He said “You said the highest point in Qatar” Until this point I think he thought that I was meeting someone. So I got back in and he drove slowly on this rocky sandy track up and right towards the summit plateau. I said stop here, we are on the top. He was wide awake and seemed very excited, we took photos and he phoned several people who he asked me to talk to as I had mentioned it was my country high point #48. He sent photos of me to his mates and I thought great he is going to be knackered on the way back now!

After 20 mins on the top and having spoken to several random people I said we should head back as it’s not good to be here for long.

For 30 mins he was fine and then suddenly he just went. I shouted wheyyyyy! And he shot up.. We were well onto the other side of the road and luckily there was no oncoming traffic at that point. There was no layby as the motorway was raised and to be honest it was just a crazy drive as he refused to turn off at junctions and said he was OK. I kept talking to him loud and after several more wheyys to keep him awake we pulled back into the services from earlier and I brought him a red bull and said have a sleep which he did for an hour.

When he woke he was a totally different driver that 30 mins to the airport was a lot better indeed and his 22 years of driving showed. I’m still not quite sure how we didn’t end up completely off the road or under a lorry as there were several times I thought this is it! It turned out that it wasn’t the military or even the police that I needed to worry about in Qatar.