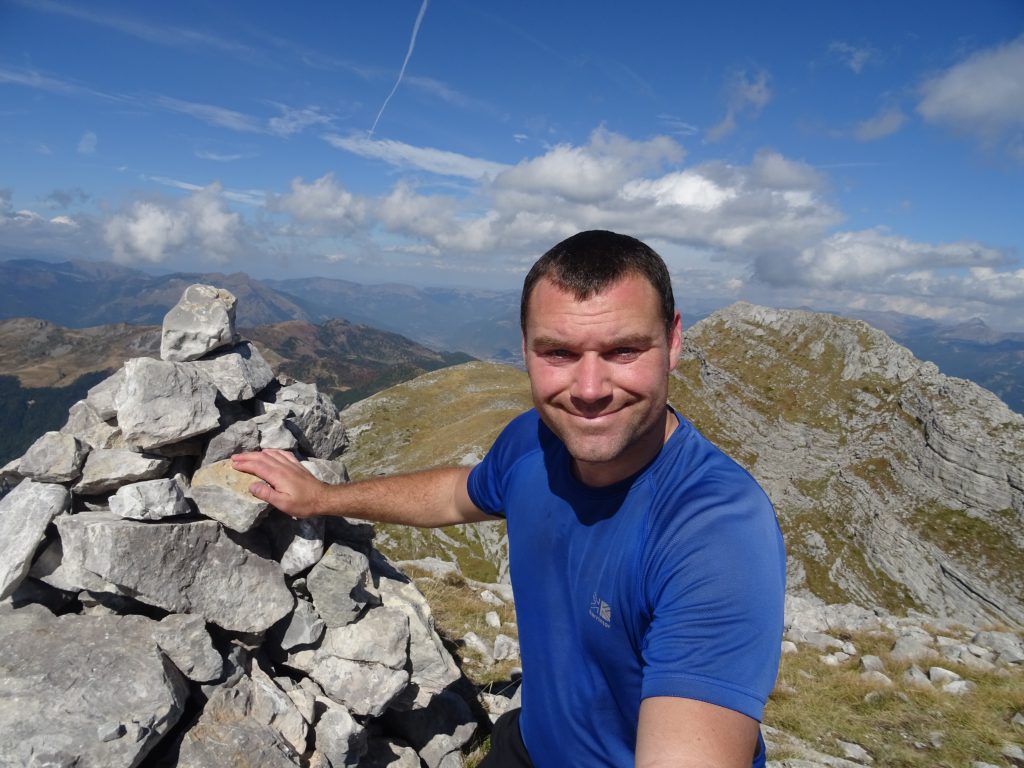 Having only ever been to Montenegro briefly before (around an hour while climbing Maglic in Bosnia Herzegovina) I was looking forward to finally having the chance to see more of the country on this trip.

The government and tourist agencies in Montenegro still insist that Bobotov Kuk (2523m) is the official highest point in the country even though there are four higher mountains within their boundaries, of which Zla Kolata (2534m) is the highest. I can only assume the reason for this is tourism, these higher mountains are located on the border with Albania and not near the Durmitor national park which is a UNESCO world heritage site. Bobotov Kuk being the parks highest point. Having seen many photos I am sure the area is fantastic but my aim is to stand on the highest point, therefore, Zla Kolata it must be.

A flight to from Luton to Podgorica, the capital city of Montenegro followed by a four hour bus journey to a small town called Gusinje took me as close as I could get to the mountain. This is where I would spend the evening before climbing Zla Kolata the following day.

After a good sleep and plenty of food and drink, I set off quite early from my hotel and walked (Cows accompanying me at times) along a road for 6km to a small hamlet called Vusanje. It lay in the middle of a valley where mountains could be seen in all directions. It was from here my ascent would start, taking me first along a track and then through vegetation, across farmland before continuing to climb with the terrain becoming more mountainous and rocky. The track initially was fairly steep and well defined with several paths that partially separate only to converge again further on. There were several small watercourses crossing the route. Although as it was September and having a few dry days beforehand meant only two would be possible to utilize if I needed to top my water up on the way back.

There were blue skies overhead with my cap yet again proving its worth as the sun continued to beat down making for another sweaty ascent. As the weather was nice I stopped many times for photos and videos along this section as there were fantastic views above the treeline. I pushed on knowing that I would soon need to bear to the right which is when the terrain would become much more fun. Large boulders were everywhere for the following few kilometres, Some heavily weathered forming weird shapes although easy enough to jump and move across at pace.

After the boulder field, the land opened up and flattened leading to a flat grass covered area which would perfect for camping. There was a sign in the middle pointing in the direction of Zla Kolata along with a few other places nearby. I had some food and drink and pushed on, there were one or two small sections requiring you to use your hands on the rocks but certainly nothing too difficult.

I saw a man coming towards me with headphones on who had a bit of a shock when I said hi as he was oblivious to my presence until I was right next to him. Easily done in the mountains when you go hours or days without seeing anyone. We had a chat and he said he was recording sounds. That’s a bit different I thought, I tried on his headphones attached to a very posh recording device including a wind muffler. The audio was crystal clear. Something I certainly could have utilised last week for my videos in the very windy Arctic circle I remember thinking.

The small track meandered around larger boulders, passing a few caves before the valley opened up with the steep cliffs of Zla Kolata on my left hand side becoming visible and from my position seeming impossibly steep to ascend. I continued on with the sweat beading off me, knowing I would need to start being a bit more cautious with my remaining water. After continuing for less than a kilometre I saw a full water bottle perched on a rock, that’s odd it must have fallen out of the man’s rucksack who I had seen not long ago. As we were heading in opposite directions and with no sign of anyone else ahead I decided to drink it. It was just what I needed before the steep section to the summit.

I continued along the valley until reaching a point shown on my phones OsmAnd map where I could turn off to the left and start heading up the mountain. There was a faint path at first but upon reaching a rock face I was pleased to see a big red dot on the wall with another one 30 meters ahead leading in the direction I required. The route still looked deceptively steep to climb from this angle but I carried on over rocks and loose scree with the track becoming more defined as peoples desire trails must have converged as the route got steeper. A massive rock lay below in the Cirque easily traced to a massive gap in the rock face hundreds of meters above with it clearly being visible where it had broken away. Several times I heard rocks and scree falling down the opposite rock face causing me to pause although I was in no danger before continuing onwards. The track zigzagged several times before reaching the col between Zla Kolata and Dobre Kolata (It’s a similar height to Zla so I would be climbing it also just to make sure).

I followed a trail to the right for a few hundred meters before losing it and deciding to just head straight up to the top as from my map it was only 100m vertical ascent from the col. It was fairly steep but no trouble at all, a few rocks to scramble over on the last bit but I could soon see the cairn on the summit. From the summit, the views were superbly extensive and panoramic. It was by now well into the afternoon and the temperature on the summit was cooling for the first time all day. I took the customary photos, videos and looked several times over towards Dobre Kolata which from here looked quite level on the horizon but with no mountains behind it’s difficult to tell for sure. Nevertheless, even though the day was pushing on I decided it would certainly be best to climb that one too. From here I could see that it would be a lot steeper with cliffs and seemingly quite exposed sections.

I quickly descended Zla and headed up Dobre keeping to the centre as much as possible as scrambling on scree above cliffs is certainly a bad combination. I saw two small cairns on flatter sections and from there found a way around and along the top of the rock face and onto the summit ridge. The views were even more impressive from here than on Zla. I continued along the ridge to the highest point but it was very clear indeed that Zla Kolata was comfortably higher and my GPS agreed. Around 15m higher in fact. I descended the same way retracing my steps as best as I could and quickly found myself back at the col. The descent down the steeper section to the valley from here was rapid. The sun was no longer obscuring my view of the mountains as it had been all morning so I took a few more photos for good measure.

Past the caves and over the large boulder field until once again reaching the valley that led to Vusanje. I descended for about 15 minutes and found the trickling water source I had noticed earlier. A pipe had been laid under the path to allow for drainage but there was a small path down towards the end of the pipe so I decided to refill my water bottle just in case. I was able to jog for quite a while as the terrain was ideal, zigzagging at times but at a good pace. Upon reaching Vusanje I had only just turned right and stepped onto the road for the 6km walk back to my hotel when a car that was reversing off his farm stopped and offered me a lift, I accepted as it saved me over an hours additional walking.