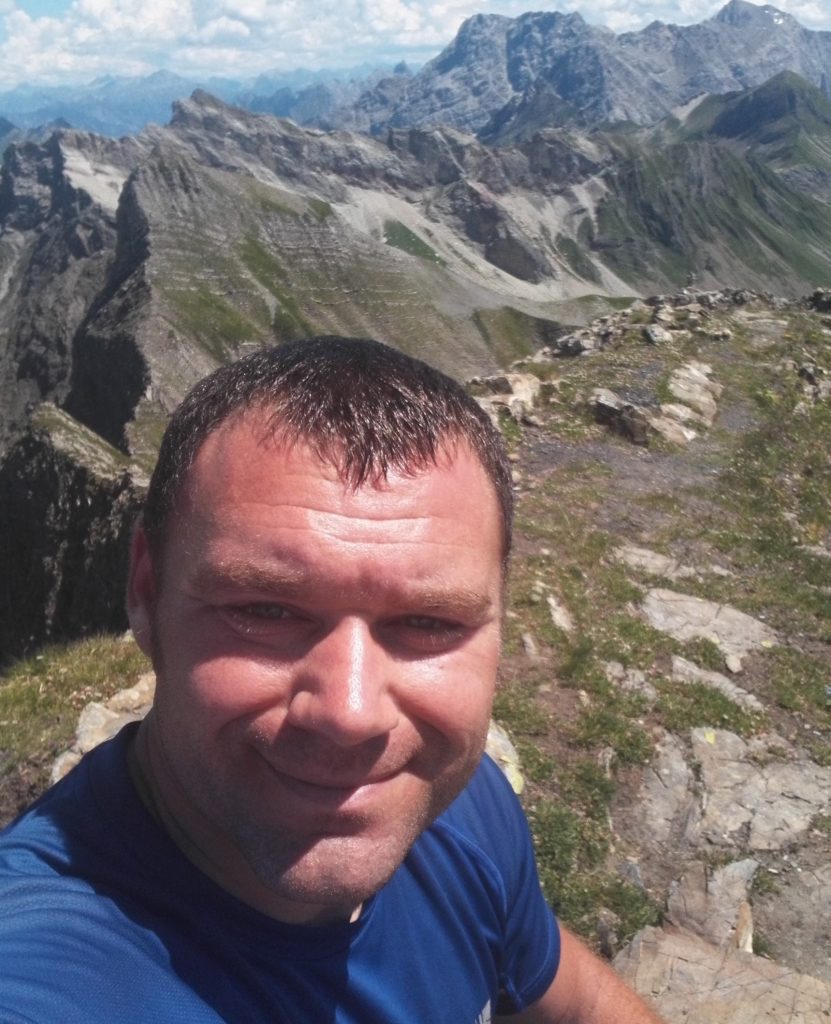 Despite Liechtenstein being one of the smallest countries in the world (25km x 12km), It’s the highest point Grauspitz is not what you would probably expect! It’s a stunning 2599m tall mountain with very impressive ridges and steep cliffs.

Having spent the last few years researching country high points I knew that this mountain is not climbed very often and as a result there are no defined paths to the summit.

Most people visiting the area catch the Alplibahn cable car from Malans then from the summit station they climb Falknis (2565m). On several trip reports, I had read people heading by the same means along part of the Falknis path but then continuing past Grauspitz before coming back on yourself making a climb onto a ridge leaving a very rocky scramble to the summit. Having looked over the maps and cable car timetable my plan was to fly to Zurich and book the Alplibahn on Day 1, Climb Grauspitz on Day 2 and then head back home on 3rd Day.

I booked an early morning flight from Luton to Zurich that arrived around 10:00. Then from Zurich airport, I brought a train ticket to Landquart, a small town about an hours walk from the Alplibahn. I did have to change trains at Zurich HBF en route but that was simple enough as they are frequent. I needed to get to the Alplibahn as early as possible on day 1 as I had read that you need to make a reservation beforehand.

The weather was fantastic and after an hours walk from Landquart I soon found myself at the Alplibahn and it was only 12:15. I only had a small amount of water on me but I was seriously toying with the idea of heading straight up today as the forecast for the following day was heavy rain and thundershowers.

I approached the office and asked what was the earliest possible reservation I could make for the following morning. 08:15 was the answer with me returning at 17:00. Over 8 hours, which I knew should be enough time even though I would be carrying all of my gear with me. Finally still undecided I ask if she knew the weather forecast for tomorrow? To my surprise and contrary to the forecast she replied in broken English.. Sunny, Rain in the evening. I had a think and decided that I would head to my hotel this afternoon as planned, relax and climb Grauspitz tomorrow.

I set off for my hotel in Maienfeld about an hours walk away and took several photos along the way as the scenery was stunning and the skies were blue, although still with the niggling thought that the weather was forecast to be poor at best tomorrow. After the fifth photo, I went to take a video and I was greeted with an error message on my camera saying no memory card? That’s odd I thought! So I tried again.. the same message popped up. I opened my camera to look and it turns out I had left my memory card in the laptop at home while updating my website earlier that week. I couldn’t believe it. I was now down to my phone which takes fairly good photos but the video on the other hand is not so good.

Disappointingly I headed to the hotel and looked for a local shop that I was hoping sold memory cards, but as its a very small town there was only a Spar and they didn’t. After topping up on supplies I headed to my room and knew I best put my phone on charge even though I do have a battery pack just in case. The socket was 2 pin but an oblong shape so I couldn’t fit my adapter in. It was starting to go pear-shaped and with the forecast still saying heavy rain and thunder tomorrow I started to think whether I had made the wrong choice. I put the TV on and had a drink and thought, I wonder if there’s a USB port on the TV? There was.. Phew! I knew it would take quite a while to charge along with having to balance my phone on the back of a chair for it to reach but it was charging, albeit slowly.

After a much needed nap for a few hours (due to travelling throughout the night to catch my flight from Luton airport) and watching Gone in 60 seconds in German, I was feeling a lot more optimistic for the climb tomorrow.

The next morning I set off from my hotel around 06:30 and arrived at the Alpibahn station around 07:45, half an hour before my reservation. After paying the 18CHF (£14) for the return ticket the same woman from the day before ushered me onto the cable car along with another climber and before I knew it we were off. Perfect! and 30 minutes earlier than planned with the weather so far was looking great. I just need it to stay that way until after the scramble on the loose rocks later.

On reaching to the top of the Alplibahn we both set off in the same direction, having already spoken about our different climbs in the cable car for the 14 minute ride. He was climbing Falknis therefore we would be on the same route for a while. Armed with just my phone I took quite a few photos but not as many videos as I would usually. But that being said due to the nice weather they actually looked fine. We walked along a path and past a large group of cows with the distinctive cow bells ringing, Very much typical Heidi land. I continued up a steeper section until the path reached the top of a hill which offered extensive views in all directions, from there I could see I needed to continue quite a bit further down to a small farm called Ijes which was still out of sight.

It was mostly downhill for the next 45 minutes which is a bit demoralising especially as I knew it would be the same route on the way back. while on the way down I caught my first view of Grauspitz very much in the distance to my left. I continued along the track turning off at a sign saying Ijes and after a few gates, I reached a long tunnel that was around 200m long and quite dark at points with intermittent gaps that let in just enough light to walk when aided with my camera’s light. The tunnel meant I was well on track and not far from the start of the actual climb.

On reaching the farm at Ijes some 20 minutes later I crossed over several electric fences and started ascending up the eastern slope until I met the ridge that leads up to the lower Hinter Grauspitz on the right. My plan was to descend into the cirque and head straight up to the saddle on the ridge between Hinter Grauspitz and Grauspitz then head left along the ridge to the actual summit. The terrain was steep and boulder-strewn, There were still several patches of snow on the route and upon reaching the first one I heard a rumbling noise above from Hinter Grauspitz. I watched several very large rocks rolling and then bouncing down towards my intended route to the ridge. Not good at all!

I knew that speed was going to be paramount for that section, So I took my rucksack off and put all of my essential items into my smaller draw cord bag to reduce weight therefore making the climb a lot easier and safer. I left my bag by some large stones and set a GPS marker with its exact position just in case the weather deteriorated and I lost visibility. I soon set off over the boulders while keeping an eye on the steep cliffs to my right for rock fall. The rocks were a mix of large and small at first but they became smaller the higher I climbed as the ground became steeper. This did cause me to slide several times although I made sure I kept my other foot firmly planted on a secure rock at all times to prevent a fall. I crabbed to the left further and further until I came to a point where I was on quite a steep section but felt comfortable and headed straight up to the summit. There was a false summit beforehand with a very steep and long drop to the west side. I lowered myself down a few large rocks to reach a small saddle and then up to the real summit. I was greeted with fantastic views and some crazy looking ridges. I took the customary photos and videos but soon needed to head down as my cable car was at 17:00.

The descent was quite quick although I did dislodge a few large boulders that rolled and then skipped and bounced down the steep slope for well over a Kilometer and then continued rolling up the other side of the slope. Thankfully I had the mountain to myself and I can imagine if it was popular there would be serious injuries quite often due to rock fall. Upon reaching my bag that I had left I quickly drank the last of my Fanta and headed back over the ridge and down towards Ijes. The sun had been shining all day and I was pleased to reach a small stream I had crossed several hours earlier enabling me to refill my water bottles and of course rehydrate.

From here I knew I only had 2 hours to get back to the cable car so I needed to jog the flat and downhill sections to keep on track. There was also that long steeper section on the way back that was a test but I soon found myself on the final section with a sign saying it was just 25 minutes to the Alpibahn with me at this point having 40 mins to spare. When I arrived I sat on the terrace and waited for the 17.00 cable car. A barmaid asked if I wanted a drink a few times but I declined as the prices were very expensive, She returned once more and asked if I would like a glass of water. I can only imagine her persistence was due to the fact I looked shattered and in need of a drink, but I was very grateful. The 14 min ride down passed quickly and just left me a one hour walk left to Landquart where I brought a lovely bottle of milk as a reward, changed my clothes and freshened up just as the storm that was forecast hit. I was surprised and relieved to have stayed dry on this trip and I was soon on the train back to Zurich leaving me time to grab a McDonalds before making my way to the airport where I spent the night before a morning flight back to Luton.