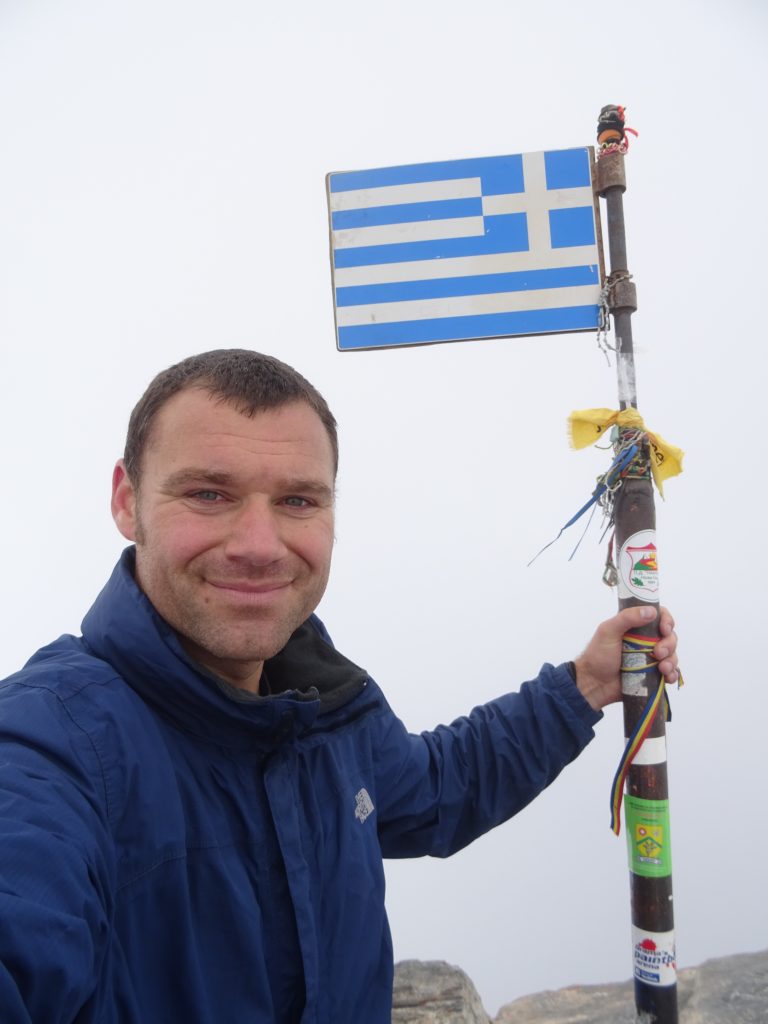 Having had an attempt to climb Mytikas peak the highest point on Mount Olympus thwarted by snow and lack of visibility five years ago, I wasn’t going to take any chances and gave myself an extra day there just in case. I had previously climbed to within 100 vertical meters of the summit last time so I didn’t need to do a great deal of research regarding the route or planning transport. I simply rechecked train and bus times online and after finding reasonably priced flights I once again headed to Thessaloniki.

The flight I booked was scheduled to land after midnight so it made sense for me to wait at the airport and then head to Thessaloniki city centre early the next day saving me unnecessary hotel expenses. Having spent a comfortable night at the airport I caught the airport bus to the train station and brought tickets for a train to Litochoro. I wasn’t particularly in a rush as my aim that day was to climb halfway up the mountain to around 2100m and stay at the refuge for the evening, then summit the following day and return to Litochoro and catch the train back to Thessaloniki.

I arrived at Litochoro train station already knowing that there was no public transport to the trailhead in Prionia which from this point was a good 26km/16Miles. I walked to the trailhead last time but knew a taxi there from Litochoro was possible if my plan of hitchhiking fell through. I started walking the 6km towards the town, It was very humid and after a few hundred meters I was already sweating. About halfway, after a few cars I had tried to flag down drove straight past a car finally pulled over. It was a young woman who lived in Litochoro, she gave me a lift for the remaining 3km and asked what brought me there so I told her about my country high points project.

She dropped me off right by the taxi stand and I walked over and asked how much it would cost to the trailhead, €25 was the reply. I said €20 but he shook his head and said fixed price. I didn’t budge on the price and walked off, I waited about 100m along the road on the corner which led 19km to the start of route E4 in Prionia.

After 30 minutes a taxi pulled alongside me, It was the man I had spoken to earlier.. He said €22 and I agreed. After a few minutes, I opened my wallet after realising I only had €20 and a few cents, the rest was in GBP! The driver spoke broken English but was genuinely interested in my mountain climbs around the world. We arrived at Prionia and I had no choice but to come clean and offered him €20 and 20 cents. I shrugged my shoulders with my palms out but to my surprise, he said no problem and gave me his taxi card for the return trip.

There is a wooden hut/restaurant at the trailhead in Prionia along with a large information sign showing routes and refuges around the area that I remembered reading 5 years prior. The route had been greatly improved and it was obvious that quite a lot of money had been spent creating better paths and wooden fencing without being too much of a visible blight on the landscape. It was easy going as the path continued through forests and climbed upwards offering great views of the surrounding hills. I did push on for a good few hours and as I was making good time the thought popped into my head that I could make a push to the summit and head down by torchlight. As I didn’t really want to come back for a third attempt I played it safe and arrived at the refuge “Spilios Agapitos – ~2100m” with plenty of time to relax.

The last time I was there I slept in my small North Face tadpole tent on a snowy terrace outside the refuge. When I entered the refuge I was greeted by the same lady as 5 years ago she was still running it, there is a picture of her as a young girl on the wall in the dining area showing her on the summit of Mytikas with her dad in the early 1970’s. It cost €13 for a bed with sheets for the night which was good value and there was plenty of room, meals were extra and there was a fair range available considering where I was. I took my boots off and put the required flip flops on to walk around and headed to my bed. I found a single which was perfect, I brought some chocolate and a drink from the reception and sat in the large dining area with log fire burning, it was quite a large room and could seat around 40 people comfortably.

A Russian couple came and sat next to me after a short while and produced a map showing me the route they had taken over the last few days including Mytikas. The dining room started filling up, Two Israeli lads Jonathan and Omry also joined me and the Russians at the table. They had walked from Litochoro as I had done 5 years ago so I could relate to there long winded climb so far. They were aiming to climb to the highest point and also had several more days to hike around the area. After chatting for a few hours they asked if they could accompany me tomorrow in going to Mytikas as they had heard my experiences in climbing quite a few mountains and as it was there first big one, I agreed and we set a time to meet in the dining room the next morning.

The next day was summit day and a chance to put to bed the annoyance of the last 5 years regarding my unsuccessful attempt. I met with the guys and we set off continuing up along the E4 path. It was quite rocky and steep in sections but we made good time zig-zagging and after a few hours, we reached a sign which is where our path leaves the E4 path. We stopped for a break and the guys made us lovely Israeli coffee and I repaid their generosity with chocolates and sweets! We pushed on and before long found ourselves on the top of Skala (2866m).

I knew from here the real mountain climbing started as it had been quite an easy path up until now. A man approached me and asked if we were heading to Mytikas as he was also wanting to climb but didn’t really want to go alone. He was Hungarian an had climbed other country high point around Europe, So within minutes we were laughing about random obscure high points and I said how his high point “Kekes – 1014m” a mere 15 minute walk was harder than the route to Mytikas. This would be his 13th country high point and my 36th!

We set off and the route immediately headed down rather steeply before turning to the left and continuing along a rocky ridge with many red circular markers showing the way. I was feeling good but took my time as I was leading and the Israeli guys had large rucksacks along with the Hungarian guy seeming quite weary regarding the level of exposure and scrambling. He had climbed Triglav previously and said that this was more difficult? Strange I thought. The difference I guess is that he had a harness on Triglav whereas I didn’t, so maybe it was really apparent to him that his safety net wasn’t there.

We progressed along the ridge to the point where it started to get steeper and I reminded the guys to take their time and be careful of loose rocks falling. We reached the top of the ridge where I had stood 5 years before in total whiteout with no view of the way to the summit. This time the visibility was a lot better and I could see a fixed cable leading down and around a large rock and down out of sight. I could see why I hadn’t seen it under a lot of snow before, We negotiated the fixed wire and headed further down before getting our first view of the summit of Mytikas with its Greek flag.

With the top in sight, we scrambled up the final section and all stood successfully on the summit. We had a drink of coffee made by the Israeli guys and took lots of photos along with a video.