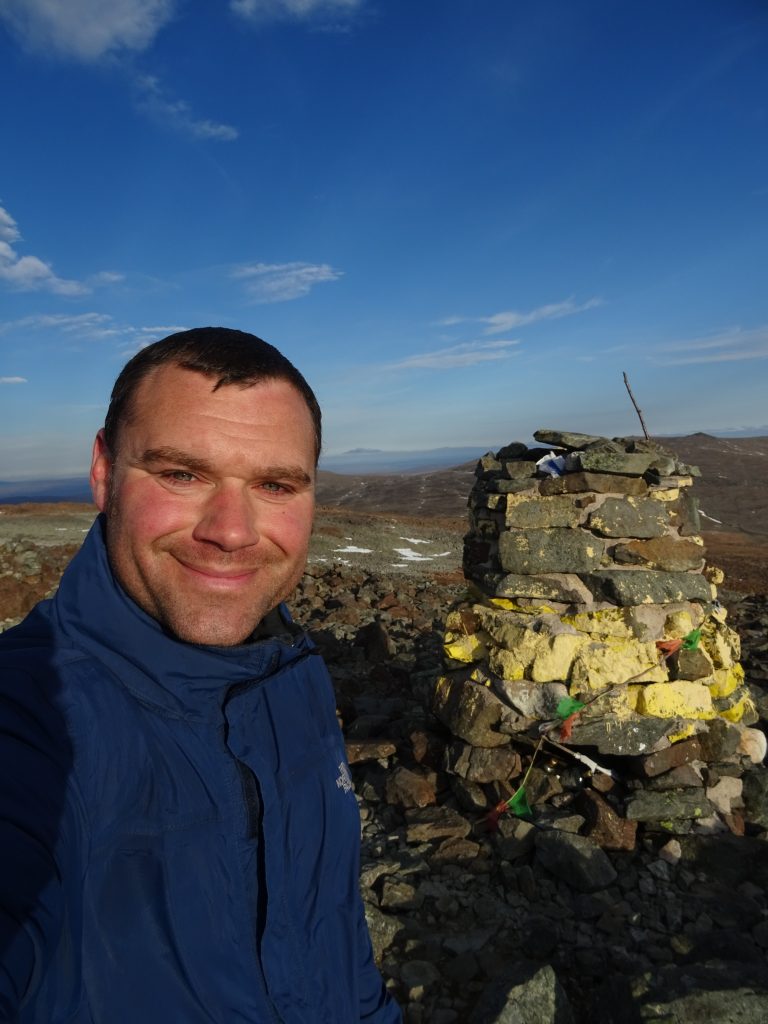 Another trip to the Arctic circle. This time I ventured even further north to climb Halti, the highest point in Finland and the most northern country high point in the world.

I flew to Tromso in Norway via Oslo and from there I caught a bus for the 3 hour journey to Birtavarre. It’s a very small town with only a few shops but it was ideal to get the supplies I needed for my upcoming trip. I stayed in a wooden cabin on a campsite just a few hundred meters away from the bus stop called “High Camp North Birtavarre”.

Due to having a very long walk ahead the following day, around 70Km I had an early night but didn’t need an early start for once as it doesn’t go totally dark throughout the night and therefore it would be light enough to walk back to Birtavarre through the night ready for the bus back to Tromso early the following morning.

After a good sleep, I left the wooden cabin around 08:00 and set off along a paved road heading towards the mountain. As I was starting from sea level the 27.5Km to the start of the actual climb at ~750m would take me 5.5hrs. I passed through several small rural towns until the road ended and turning into a dirt and gravel track. From here about 2 hours in the terrain change and the valley became steeper but the track was wide due to it being used for large vehicles. The downside was the amount of dust they left on the road surface.

As I wound and zig-zagged back and forth uphill the wind started picking up. It was very gusty indeed, often causing me to hold my hand over my face to keep the dust out. It got worse as the track got steeper and the gusts were now strong enough to pick up smaller stones and grit flinging them towards me, I plodded on covering my face. An hour passes and the terrain had started to flatten out and although the wind was still prevalent the track was a lot less dusty.

I knew there was a large lake ahead from my research but it seemed to be taking a long time to reach it. Finally, on the horizon I could see the shimmering of a large body of water, It was the lake. Thank god for that I thought! The track split in two with me having to take the left hand one which contoured around the left hand periphery of the lake. The view was stunning with the mountains creating a nice backdrop. I was still quite a long way from the “Start” but for the first time I could see Halti. It didn’t look overly difficult, there were visible snow patches but I knew from my research beforehand that the whole summit area is very rocky and littered with boulders and it would be that which would make the going significantly slower and more difficult.

After another hour or so I had reached the end of the track. There were a few wooden huts but I didn’t hang around as I wanted to push on so I just had a drink and a snack, along with a much needed sock change after the many hours of plodding.

The wind was still strong which created mini water spouts and sprayed water out of the lake right over the path. The mist was refreshing at first but soon forced me to jog to get through before I got soaked. I continued around to the furthest hut and saw a notice board and a sign which said Halti 6km. But of course if it wouldn’t be as straightforward as the previous 27.5km so far that day as it would be on steeper boulder strewn ground for the majority of the ascent.

A hundred meters after the hut I passed through a fence/gate along flat ground until after a kilometre or so reaching the first boulders. They slowed my pace right down significantly as you have to be extra cautious so that they don’t move causing you to slip or maybe get a hand or leg trapped. I pushed on for quite a while before reaching a fence along the ridge that I knew from previous trip reports I could follow as it would lead me in the direction of the summit. It seemed to take an age to cover a mere 2 or 3 km but by using my OsmAnd app I was constantly aware of where I was and the direction I needed be heading which otherwise could have been difficult terrain to navigate especially in poorer conditions.

I arrived at the point where I had to leave the fence and head directly to the summit which was now only a few kilometres away. The boulder fields continued right to the summit itself. I welcomed the snow patches taking a handful of snow to munch on each time I passed, as during the long walk I had consumed most of my water. Thankfully I knew there would be several small streams on the way back where I could replenish my supplies.

There I stood next to a tall yellow cairn/pillar that signified I was standing at the highest point in Finland. There is also a summit log book in a very new looking metal container next to the pillar. From the summit there were rocks and boulders as far as you could see in all directions. the weather was good, the views were extensive and the wind had by now strangely died down compared to lower down in the valley.

Halti is actually situated on the slope of the mountain with the summit situated in Norway just a few hundred meters away. There had been talk recently of Norway giving Finland a few square meters of there land as a gift for there centenary this year (2017) the highest point would, therefore, be a summit rather than a slope. After some publicity, this eventually came to nothing as the Norwegian constitution stipulates that the country is indivisible.

Regardless of the constitution thought it best to head the few hundred meters to stand on the highest point of the mountain on the Norwegian side just in case they had a change of heart in the future.

I looked at the time.. Jesus! It had taken a lot longer than I had anticipated. I had been going a good 9 hours from Birtavarre and had only just reached halfway. I knew it was going to be a long slog to get off the mountain that’s before the 27.5km back to Birtavarre for the bus. The going was slow and included times where I was heading uphill again. Thirst was setting in and progress seemingly zero. The sun was setting on the horizon yet as stunning as it was my focus was to descend and be off the rocks before it became dark and to get to a small stream I noticed on the way up. I made it past the last of the boulders and took a look behind and gazed up at the terrain that I had just spent the last several hours navigating.

Just before reaching the hut and the start of the long track back I saw the trickling stream, filled up my water bottle sat on my bag and chillaxed for the first time all day. I had been going for around 12 hours by the time I reached the hut but I was pleased to have made it, just leaving the long walk back. It was a very long plod indeed, Several times I thought I should just sit down but my aim was the bus stop so I carried on, I had my app counting down the kilometres left setting myself mini targets with a chocolate bar as a reward for reaching them. It took nearly 6 hours to reach Birtavarre from the foot of the mountain as my pace had not surprisingly slowed during the walk.

When I finally arrived into Birtavarre it was like a ghost town, It was 03:00 and nobody was around. I headed to the bus shelter and hoped that a very nice toilet block I had spotted when alighting the bus would be open. To my surprise and relief it was. I turned the light on and sat on the floor in the far corner. The tiled floor seemed to be heated and there and then I knew it was perfect to spend the 4 or so hours until my bus arrived to Tromso. I locked the door and took my boots off, the 70km had really taken its toll on my feet. I emptied the water I had previously collected from the stream down the sink. It was the usual peat coloured liquid that you really only drink in those situations,  I exchanged it for clear refreshing tap water. I then set an alarm on my phone and using my bag as a pillow I had a great sleep for the four hours and after a complete change of clothes and a freshen up I was back on the way to Tromso. It had been a long one but mission complete none the less!