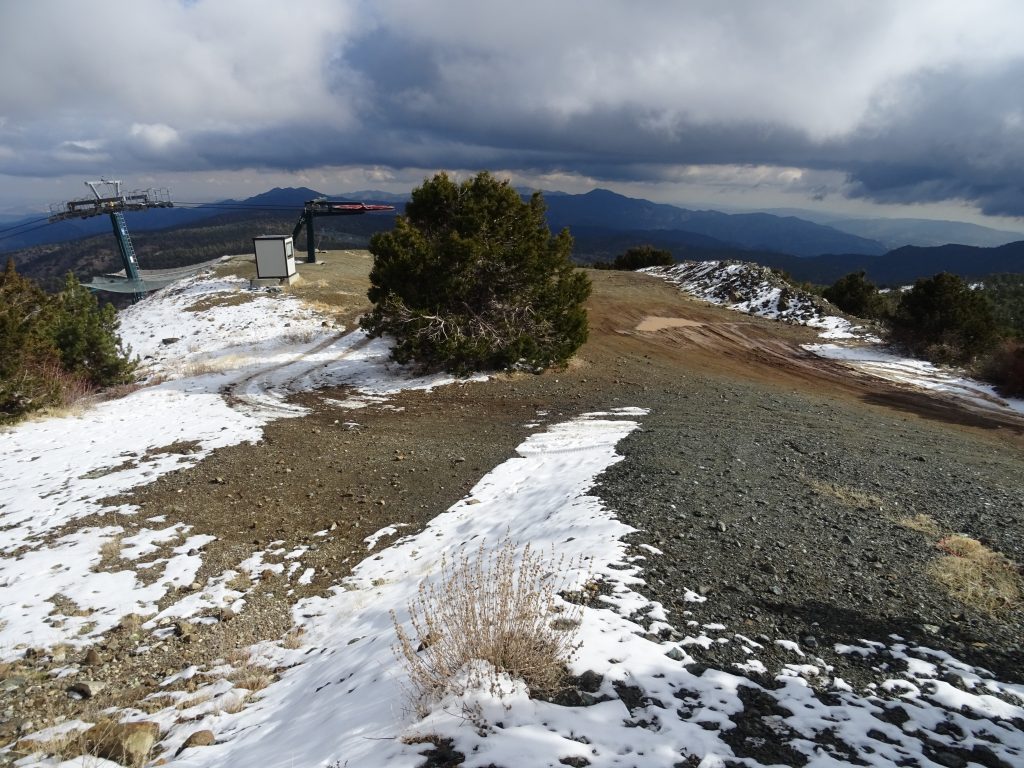 I flew from Tel Aviv to Larnaca and caught a bus to Limassol then another bus to Saittas which was the nearest town to my hotel I had booked for that evening.

The next day was going to be a long one. There is no public transport to the highest point on Mount Olympus in winter but as there is a British military radar facility on the summit there is a road. The challenge today would be the 45km walk from my hotel to the summit and then back to catch the bus in time to get back to the airport that evening.

The weather was clear but cold, I had planned on potentially hitchhiking for as much of the road section as I could therefore saving me time and the unnecessary road walking which I am no fan of. After about an hour and a half of walking with many many cars driving past as I waved for a lift I thought it was going to be one of those days until an old man in a land rover pulled over after my waving must have been getting more erratic as he looked concerned. He didn’t speak English but the road was straight and I had my OsmAnd app on my phone so I knew when to alight. I jumped out after about 8km as he was turning and I thought the next car that comes by I will flag down.. Success. It was a shop owner who ran a business in Troodos a village where I could start my proper walk to the top from… Perfect!

He spoke broken English and told me his father used to sell fruit and veg to the British when they were at the Radar facility on the summit. He dropped me off by his shop, by this point there was a little snow underfoot. I thanked him for the lift and headed on towards the military road. The sky was blue with the occasional low dark cloud passing by, After an hour or so I was near the summit with one final bend to go.

I could see the Starbrook wide field telescope on the summit and the RAF Troodos military compound accompanied with several signs showing a camera with a cross through it. As with other military compounds, I was aware of the photography issue but it does conflict at times with me taking a photo on the high point or highest legal point. I pushed on past two small manned outposts and heading briskly towards the main gates. By this point, I had already taken my camera out and took a super fast selfie! It looked good. I went to take another and a heard a man shout “Oiii!! No photographs” in a very British voice. I turned around as my back was to the compound and said no problem and that I was climbing to the highest point in 100 countries and would take a photo of me and the view, not the facility!

I continued back down the path but I wasn’t satisfied. I stopped and thought of other pictures I had seen showing people closer to the summit. I looked again on my phone app OsmAnd and planned to head back up to the top but to the opposite side of the military facility. There was a ski slope and another small manned box but this time unoccupied. I made my move and quickly jogged to the fence close to the summit where I had seen the other photos taken. After the customary photo and video I headed back down and within 45 mins I was back at Troodos.

The weather had started to deteriorate by this point and it was sleeting. I had the feeling I was going to get soaked, who would pick someone up who is saturated? My answer came in the form of the forestry commission who pulled over after I flagged them down and with great interest in my project gave me a lift to Pano Platres from where in 2 hours there was a bus to Limassol. Within a few minutes of me getting into the 4×4 the sleet turned to hail and for a good hour there was a massive storm, by now I was thankfully sheltered undercover by the forestry commission office and was soon on the bus back to Limassol and then onto the airport for the flight home.