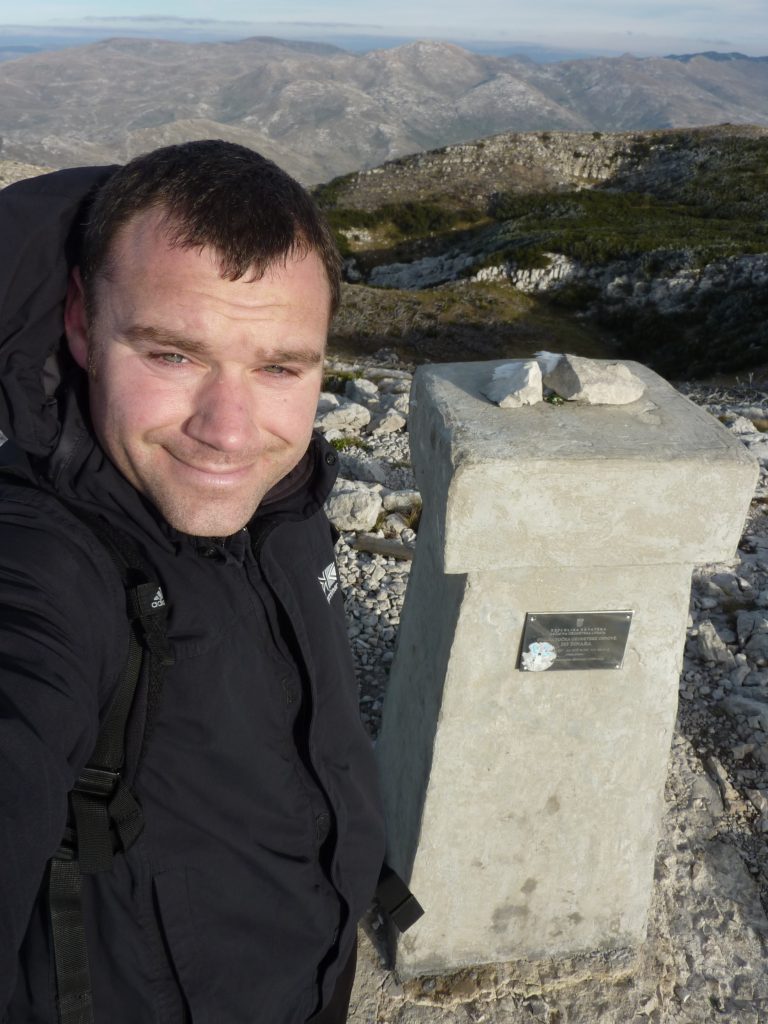 I flew from Luton to Split, spending a night there before catching the first morning train to Knin knowing I would only have ~10 hours to walk the 26 mile round trip to the top and back before the last train back to Split later that evening. I made a promising start but then ran into a big problem.

The Croatian military were using the mountain for a live fire training exercise and I could hear gunfire along with many tanks up ahead along the route to the summit! I approached a military barrier and was told in no uncertain terms that I needed to turn around and head back the way I had came immediately as an ascent of the mountain was not possible while the exercises are ongoing.

My character doesn’t allow me to accept defeat easily or the fact that something isn’t possible until I have exhausted every option and even then I still believe I can! This approach has led to a great deal of success on mountains where others would undoubtedly have turned back.

I said to the military guy, “I’ll happily walk back about 20 meters and then I’m going to be heading straight through the boulder-strewn ground and directly towards the summit” while gesturing and pointing with my hands! As far as I could see they were training a little to the left of the mountain on its slope and I was confident I could circumvent their war games!

The military guy smiled and shook his head in a way I which I can imagine him thinking.. This idiot really wants to get to the top! True to my words I headed back 20 or so meters and darted to the left of the path directly towards Dinara. The area I crossed was littered with discarded food cans and as I had read in several reports beforehand, Grenades and mortars that were simply discarded during the civil war that took place there between 1991-1995!

This was very dangerous ground in its own right even without the sound of gunfire and many tanks roaming around. I was constantly ducking while climbing to stay out of sight! I had no choice but to take my time while moving as fast as possible. I finally succeeded in going around and past, but in doing so I found myself at the top of a very deep ravine! I had no option but to turn around and head back directly towards the live training exercise. Every step I took was quick with my head down scanning the ground for anything that looks like trouble. Despite the constant firing from the tanks and bizarre whizzing/fizzing sound of bullets nearby I eventually managed to find a crossing point where the ravine was passable and I managed to cross and I was finally able to head towards Dinara the highest point in Croatia. Unfortunately, this had come at a cost.. Time!

The several mile detour had cost me a great deal of time so I had little choice but to jog as often as possible to try and regain some time. It was cold and icy on my way to the summit and I didn’t spend long on there but enough time to admire the great views, take the customary photos and videos on the highest point and quickly headed down. By this point, I had already known for a while that it would require me to continue jogging for several hours to even stand a chance of catching the last train back to Split that evening.

I decided to descend via a different route that I had seen on my superb phone app OsmAnd, Aiming to intersect a road and potentially get a lift to Knin. I reached the dirt track/road under the cover of darkness and headed towards Knin 12 miles away with under an hour by this point to catch the last train! 40 minutes passed with no car to be seen. A very sullen figure was I walking those hours down that dark road and by the time I finally did reach Knin not one car had passed! An uncomfortably cold night at the train station in Knin ensued, but I was filled with the overwhelming feeling, that against all odds and also the Croatian military I was yet again successful! Country high point #20 crossed off!

My eventful climb made the Croatian news (Click for link)