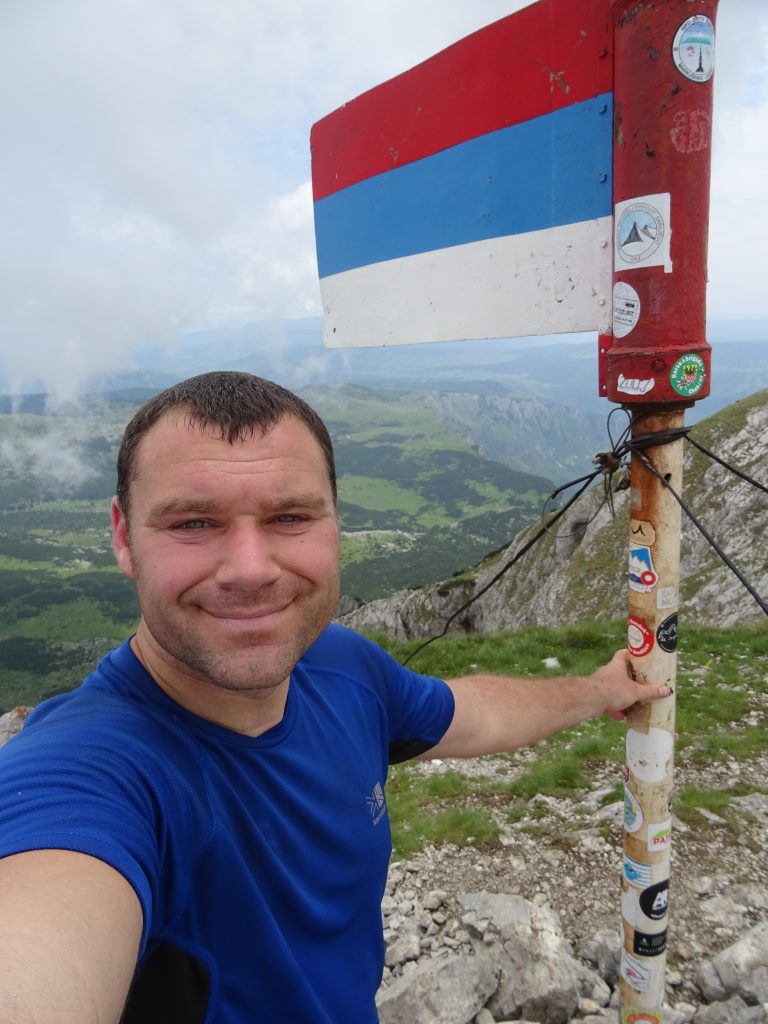 (This was a complete rerun of the same trip I had attempted 3 weeks earlier but due to a severe storm, heavy snow and rain I called it off 4 hours into the climb and re-booked the trip for mid June.)

Every aspect logistically was perfect from my previous attempt so it was just a matter of re-booking the trip which I did from my hotel room while still in Bosnia three weeks prior. I flew again from Luton to Tuzla where I spent a few hours before walking to Zivinice, a town about 8km from the airport. From there I caught a bus which took me to Sarajevo the capital of Bosnia and Herzegovina in around 2hrs 20 minutes. From 1992-1996 Sarajevo was heavily involved in the Bosnian war including the siege of Sarajevo.

Thankfully those dark days have passed and Sarajevo is now a modern thriving European city. I needed to catch another bus to get to Popov Most where I was to stay in a guest house for two nights. Thundershowers were once again forecast so I was prepared for a soaking. I had known for quite a long time that this high point was going to be a very long day and that turned out to be the case.

On paper, it worked out to 52km taking 14.5 hours. The main reason being a very poorly maintained broken up track leading 17km to the trailhead. There would be the potential for a lift I thought but I certainly couldn’t count on that so I needed to set off very early to allow enough time to reach the summit and get back to the guest house.

At 04:50 I set off, reaching the start of the track at 05:25. A sign showed it would take 7 hours to the summit from here and just under 7 hours back. The clouds were lifting and it was looking like a nice day was on the cards contrary to the weather forecast. After 3 hours I was near the point I had turned around a few weeks prior, only this time the sun was shining and I wasn’t soaked. I continued and soon reached the trailhead for the start of the climb having already walked 20km, 4hrs 30 mins, 1600m.

The trail led through bushes and forests at first before coming out onto lovely meadows with butterfly’s and wildlife everywhere you looked. The trail then left Bosnia and Herzegovina and continued into Montenegro before it would eventually come back into Bosnia on the actual summit. I could see Maglic and its impressive cliffs and wondered where the route to the ridge was as it looked quite steep from my position.

After I had reached 1800m with a slight re-accent I found myself at the foot of the steeper section and there were several fixed cables on the steep rocks that made for an interesting climb. It was quite exposed in sections and if wet it would have been quite slippery but thankfully it was a nice dry day. The route became steeper still in sections but the fixed cables were frequent and well placed. When I finally reached the ridge my legs were now feeling that additional 20km from the track but it became relatively easy going from here to the highest point.

I headed to the right and after a short 10m vertical rock section I saw the old flag on the summit of Maglic and was now the highest person in Bosnia and Herzegovina. My 50th country high point! I took lots of photos and videos but I didn’t hang around for long as there was a peak in Montenegro which I also wanted to climb back along the ridge. The clouds were rolling in and creeping up towards Maglic, but it was nice to be out of the sun intermittently and before long I had retraced my steps successfully climbed the other peak and was heading back down the steeper fixed cable sections and in well under 2 hours I was back at the trailhead.

Just leaving the 20km back to the guest house which dragged on and unfortunately not one car passed me for a lift but all in all a long 52km 14.5 hour day meaning it was a success and I had reached the halfway point of my 100 country high points adventure.