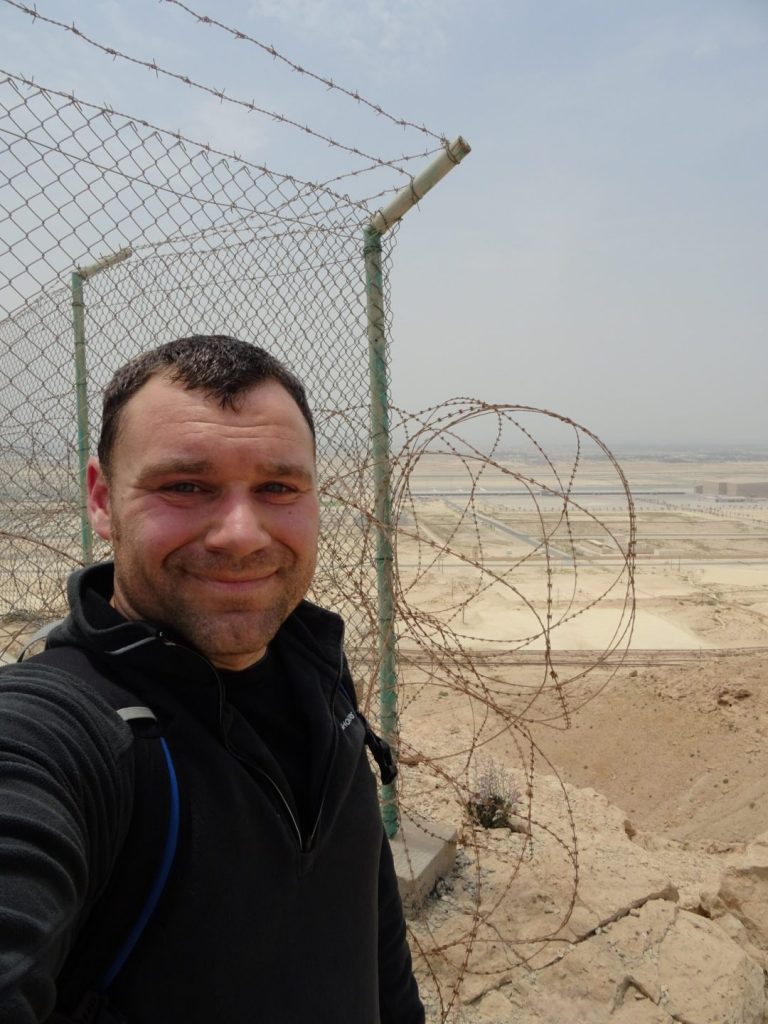 Having found very cheap flights from Birmingham to Dubai ~£17 I quickly made a plan to climb some middle eastern high points. I booked flights for the UAE, Bahrain and Qatar. All good or so I thought. I had a layover in Sofia, Bulgaria on the way to Dubai but when on the bus at the airport gate heading to the aircraft we were stopped and returned back to the gate. The flight was delayed due to a technical problem. After several hours this delay turned into a cancelled flight and a night in Sofia before another flight to Dubai the following day meaning my plan to climb the UAE high point was not possible and all I could do was head to the other airport in Dubai for my flight to Bahrain.. Not a good start at all.

The flight from Dubai to Bahrain was short and as its a small country I had planned to catch a bus to the University which is about a 2-3 hour walk from the highest point and to return the same way. The high point is only 134m but it lies inside a restricted military facility and what I had learned from other peoples experiences is that nearly everyone who attempts this particular summit is caught by the military. So speed was going to be key with my thought being that as long as I am caught after reaching the highest point and not before that was crucial.

It was a sweltering 42c and after walking for over an hour along the side of a highway in my t-shirt the sun was becoming way too warm on my arms which were now red. The only covering I had with me was my fleece so I had no other option than but to on my fleece to cover my arms and neck even though it was 42c. It certainly helped the sunburn but I was now sweating profusely!

Having been unsuccessful in hailing the two taxis I had seen I turned down the long Avenue 76 which leads close to the military facility. After walking for quite a while I heard a car slowing down behind me so I turned and saw it was a taxi who it turns out was one that I had tried to hail earlier. I jumped into the lovely air-conditioned taxi and explained my aim to the driver who was enthused initially but after a few minutes driving and seeing the restricted sign he said “Not allowed” I smiled and shrugged my shoulders and he said, “You crazy”.

I told him to pull in out of sight and wait here for 30 mins and I would be back to which he nervously agreed, even though I knew it potentially could be closer to 40 mins. Within a minute of leaving the taxi, the sun started beating down and I started sweating again. Out of nowhere to my right two very aggressive dogs came out of a shaded cave and started snarling and barking. Shit, I thought! It was right along the route I needed to take to get onto the ridge. I looked back at the taxi and the driver had got out and was shaking his head as if to say forget it.

To get this far and not go for it especially after the cancelled flight meaning no UAE high point dictated my decision and I carried on walking but made no eye contact at all with the dogs who I could see had started encroaching. I kept a steady speed and heading knowing that if I slipped or looked they would be onto me.

After 5 minutes and with the barks getting fainter I looked back as they went retreated back into their cave. I quickly clambered over the sandy rocks, bypassing a barbed wire fence and headed along a ridge coming out onto a false summit from where I could see many military vehicles and personnel within another fenced off compound. Just before the compound was the high point covered with barbed wire about 300m away.

I ran along the ridge stooping over as not to be seen and stood on the highest point in Bahrain. I took several photos and a short video before quickly heading back the way I had originally climbed. Success!

Moving uphill and at speed in that heat with a fleece still on is not good and I was really feeling it. My mind soon turned to the two aggressive dogs again. My concern was that as it was very sandy and with no path if I came down a slightly different way I could inadvertently be a lot closer or right on top of them. I managed to head a similar way but I still couldn’t see the taxi or hear the dogs. As I went around a large boulder I heard barking so I knew I was on the right track but still no sight of the taxi. Not good, perhaps he has been seen and moved by the military? I thought.

I slowly walked down the loose rocks and the barking got louder and even more aggressive than it was on the way up. I finally could see the Taxi and the dogs had alerted the driver who was now outside his car. The last 300m were not enjoyable at all. I didn’t look but I could hear the dogs getting closer and them scratching the floor. 200m to go and they were within a few meters right on my heals, I could only carry on walking at the same pace focused on the taxi. I remember clenching my fists so they wouldn’t bite my fingers and thinking with every step they are gonna bite my leg so be prepared to punch. Never have I seen or heard dogs so aggressive and agitated.

With 100m to go the taxi driver could see there was a real problem and holding his hands up, he started shouting and waving while he slowly advanced towards me. There was a meter drop off the rocks to where the taxi was parked an that was my focus. I took a few long steps and jumped off the rocks. The dogs now seeing there were two of us kept barking but thankfully proceeded no further. I think if I had have ascended on my own it would and could have been a very different outcome.

The driver was shaking his head and offered me a bottle of water, put the air conditioning on full and said “Crazy” I’m not sure if he was referring to me or the dogs but I just nodded in agreement!

Another one of the more difficult high points that are out of my hands and in restricted areas done. Unfortunately the Qatar one the following day was also in a restricted zone but so far so good.