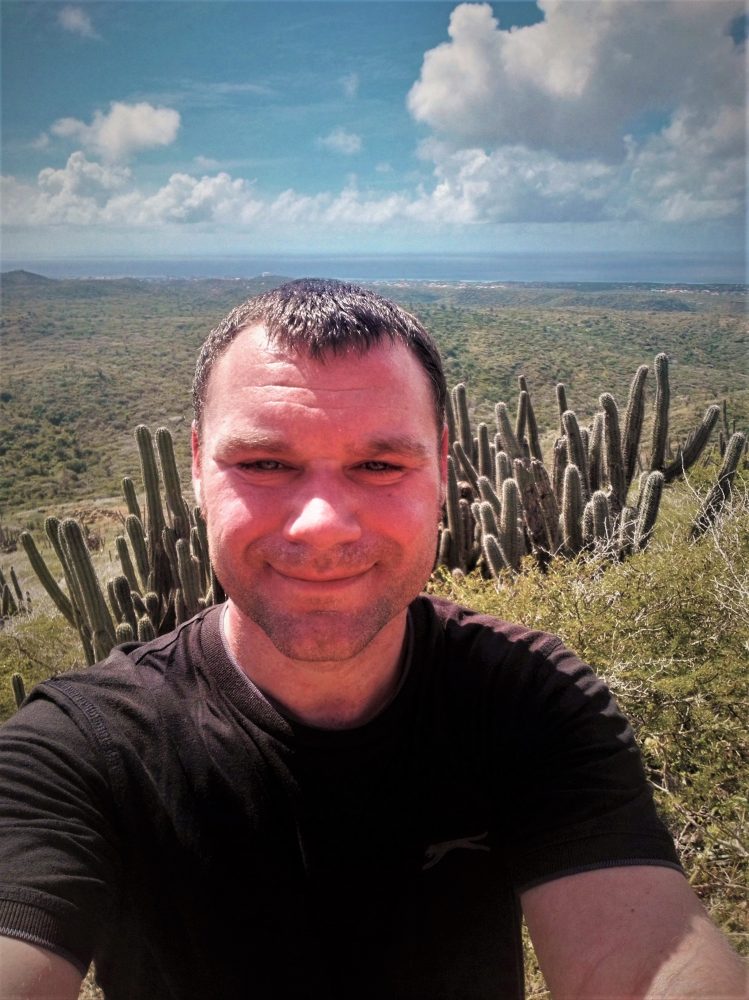 My first country high point in the Americas and the first of a planned 9 day 5 Country high point adventure. I flew from Birmingham to Amsterdam where I had a comfortable sleep in the airport by remaining air-side on arrival (Several mice running around despite being on the second floor) followed by a Tui flight from Amsterdam to Aruba with a short layover in Bonaire en route the following morning.

I landed in Aruba around 18:00 and quickly filled in the arrivals card before heading out of the airport with my phone in hand for the 40 min walk to my pre-booked hotel for the evening. I popped into a petrol station in passing to withdraw some US dollars along with with a few drinks ahead of the long walk planned the following day.

Upon reaching the hotel it wasn’t marked correctly on the map, So after a few minutes pondering and asking a local who also had no idea. I managed through the process of elimination to figure out where it should be from the address I had and hovered outside that building for a minute or two before entering. I entered, paused and looked around for a second. Was this the right place or have I just walked into somebodies house? I could hear a loud TV past the open plan kitchen so I walked through the living room and coughed a few times to hopefully gain someones attention but no reply. It was still above 30c outside so I decided to sit down under the refreshing air conditioning as I was sure this was the correct place.

10 minutes later a man appeared followed by his wife, both semi-dressed. I said hello and that I had a booking at the hotel for this evening. He nodded without speaking and lead me through to a room around the back passing a reception area which had a credit card machine to my relief. He was pleasant enough and the room would be suitable for the evening as I was planning an early start before walking the 12km to the highest point and then onto the airport for my flight to Curacao that evening around 21:00.

The following morning I got ready and went to the reception but nobody was around. I didn’t have a room key and had only made a prepayment on my credit card so I still needed to settle the outstanding balance. 20 mins past and still no joy. I didn’t have time to hang around today so I decided to head off knowing they would be able to collect the outstanding balance from my credit card. I started walking along several dirt roads before meeting a main road which would lead me to the small town of Santa Cruz. I passed a few bus stops along the way but I felt good and thought I’ll just carry on walking instead of waiting. It was already getting warm by now and I was grateful for the nice refreshing breeze to keep cool.

Upon reaching Santa Cruz I bought a few drinks and continued onto the national park passing several multi-coloured houses many of which were proudly flying the flag of Aruba. The road became a little steeper before I arrived at the national park where there was a sign stating a fee of 11 USD was payable at the visitor centre for all people wishing to visit the park. There was also a large car park and in hindsight, a taxi wouldn’t have cost a great deal but I do enjoy walking amongst and saying hello to the locals who were friendly.

At the visitor centre, there was a cafe, Quite a few maps and several smaller groups hiring bikes and quad bikes. I cooled off for a few minutes, bought another drink and set off to the highest point in Aruba. Jamanota is only a mere 188m but with my 9 days of luggage on my back and by now the temperature around 32c+ it was a good warm-up walk to start the year off and get back into the high point routine. I plodded along a steep roadway before needing to turn to the right and follow a track (No access allowed) used for maintenance of the communications equipment on the summit. I simply assumed the sign was to prohibit vehicles and not myself on foot.

I passed many large cacti’s and albeit Aruba being a small island I was heading towards it’s most remote area and it certainly started to feel like that. There are quite a few snakes and spiders on the Caribbean islands and many reports of a boom in Cobras over recent years in Aruba, in particular, meant I needed to be aware and cautious when sitting, putting my bag down or passing under trees. I soon reached a sign saying Cero Jamanota and had my first glimpse of the antenna that marked the highest point. I pushed on and reached the end of the track which opened up to a nice viewpoint area. There was a large gate blocking the remaining track that led to the summit which was easily bypassed to the left hand side. After a few minutes on the final steeper section, I was standing on the highest point in Aruba. #58 and my first country high point of the Americas. The view was extensive and I could see over to the fantastic blue waters and beaches that surrounded the islands main resorts and hotels.

I headed back the same way to the visitor centre but spent a little while at the viewpoint I had passed en route as it offered fantastic views and better landscape photos than were possible on the summit due to the antenna. I continued down and was soon back at the Arikok national park visitor centre where I once again cooled down and replenished before heading walking back to Santa Cruz. I knew from research and a sign earlier that there would be a McDonald’s restaurant waiting for me and would break my walk up nicely. I sat in there for a while before deciding my next move as I had 5 hours until my flight to Curacao and the airport was only an hours walk away. I had noticed during the walk that both of my heels had started to blister. A reoccurring problem from the several long walks last year.

I changed my socks and put plasters on and decided to head slowly to the airport giving my feet a little extra time to recover. Upon reaching the airport I looked on the departure board and was greeted with a message saying my flight had been cancelled. I went to the check-in desk to see what the plan was and all she said was to head to the InselAir sales office just outside. There was a queue so I had to wait 40+ mins before being told the flight was cancelled and I wouldn’t be flying to Curacao tonight. I’ve had cancelled flights before and I try to pre-plan and arrange my itineraries for such occurrences. After another hour or so I was given a taxi and a hotel voucher and told they would contact me in the morning regarding the flight planned the following day. Several taxis declined the voucher which was a bit odd so I paired up with another solo passenger and we made our way to our hotel.

Once at the hotel, I headed to the reception desk and was told along with the other 6 people waiting there that we would have to wait for confirmation that the hotel had received payment from InselAir before they would give us our rooms. After an hour we were told that someone from InselAir was en route to pay for our rooms in person. It took another hour and a half before they turned up and we were finally able to get a room. There were two women in their 70’s who had been waiting also which I felt was very poor indeed on both the airline and hotels part. It was clear that the hotel along with the taxi company had no confidence in InselAir paying them for the vouchers.

The hotel was actually quite nice but the following day all I wanted to do was head to the airport as early as possible due to having already lost a paid night in my hotel in Curacao (I emailed them to keep the room for me) and was due to head to Sint Maarten the following day. I arrived at the airport and didn’t mention my voucher until I got there to save any further complications. My new flight was scheduled for 14:20 but after the faff of the day before I went through security early nonetheless. I waited at the gate for several hours and noticed that another flight to Curacao on InselAir scheduled for 10:00 had been delayed with the passengers still waiting in the airport at the next gate to mine.

The hours passed by with no information and my departure time came and went with no other people coming to sit at my gate? The board still showed my flight at 14:20 I asked several members of staff and they all just said it was delayed and to wait. By 19:00 the delayed flight from that morning had arrived and they started boarding. I got up and went to their desk and handed in my passport and ticket, the woman looked at me then at the person next to her and he just nodded his head in acknowledgement. She took my passport and changed my boarding card seat number by pen and pointed to the back of the boarding queue, Still a bit confused as to what had just happened. I got on the plane and headed to Curacao. It turns out that my flight had been cancelled so I was fortunate to have got on that one. Bizarrely there were 6 empty seats at least out of the 50! A very eventful start and I’m now already a day behind schedule.. Onto Curacao.