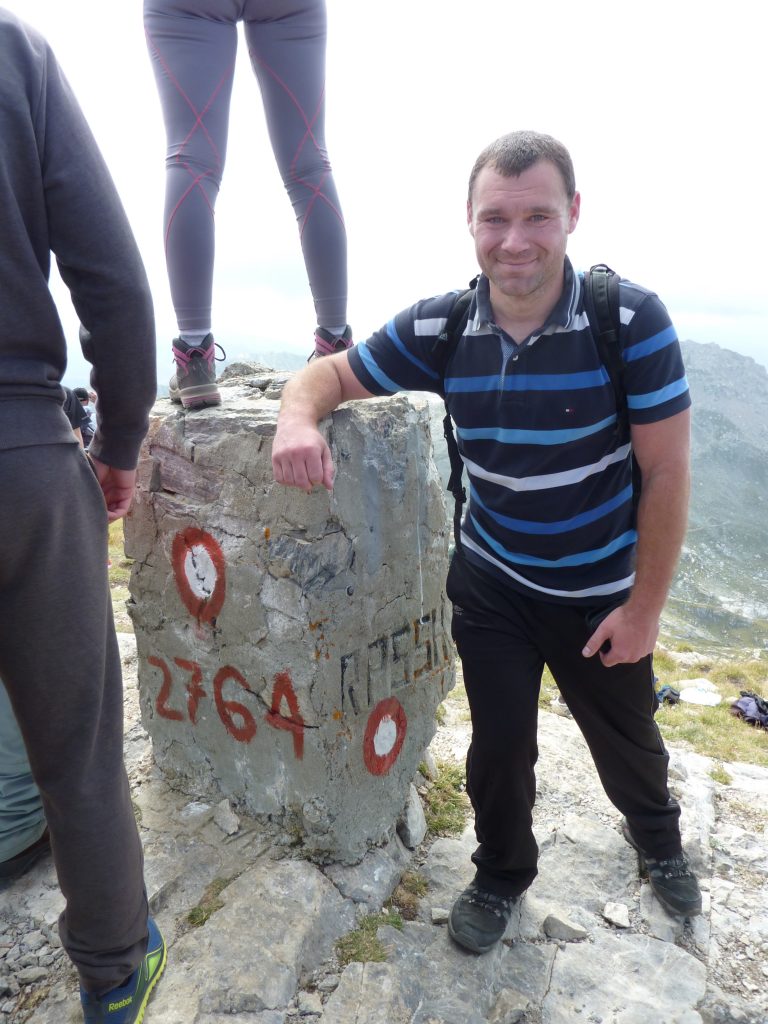 It was mid-August 2015 and after some time away from the mountains that familiar feeling of hunger, desire and need of a challenge that only climbing mountains provide had returned as it always does. I looked for potential mountains to climb and saw that Korab was the highest point in not only Macedonia but also Albania, Two country high points from the one climb.. I was sold!

While researching and looking for any information regarding climbing Korab it became clear that logistically reaching a trailhead by public transport alone would be difficult at best, I therefore needed an alternative option. This option presented itself after reading several detailed trip reports, A climbing club based in Macedonia’s capital city Skopje was mentioned who along with many of its members climb Korab annually to celebrate their independence day which was on 8th September 1991.

By scouring the internet and several social media sites along with google translate to enable me to read the content in English I ascertained that the climb would take place on the 6th September 2015. I thought that’s perfect and quickly looked into the availability and price of flights from the UK to Skopje.

Even better news came when reading the club were laying on coaches to take people to and from the trailhead for ~€10 return. I booked the flights immediately. I now just needed to find a way of contacting them and somehow reserving a seat on the coach as I wouldn’t be able to buy the ticket in advance. I posted on their Facebook page and spoke to a few members who said they would ask if it was possible to reserve me a seat. The reply was a positive one but only if the bus wasn’t full as their members had priority which of course is fair enough, But didn’t guarantee me a seat.

My flight landed in Skopje late in the evening of 5th September as I had simply planned to wait in the main bus station from 23:00 until the coach was due to leave to Korab around 05:00 the following morning. The bus station was open all night, there were benches to sit/lie on which was good although there were a few people constantly wandering around. At 04:00 a small kiosk opened, I brought some chocolate and a drink and walked outside looking for the coach as no one I asked knew anything about it.

By 04:50 I was getting concerned and even thought maybe the coach might be at a different bus station? I walked around the corner and noticed a large group of people with boots and rucksacks about 200m down the street, “That’s more like it” I thought.

There must have been around 100+ people along with three coaches, I meandered through the groups and approached a man who looked as though he was running the show. “I made a reservation” I said and he replied, “No, No reservations it’s not possible.” I ferreted around for my €10 note at which point a young man said, your the guy off the Facebook group and said something to the man. He nodded and I gave him the €10, he looked uncomfortable as if he was severely flexing the rules or just simply knew there wasn’t enough seats for everyone anyway. I quickly climbed aboard the first coach, It soon filled up with climbers and departed. It was a 2hr 30m journey to the trailhead of which the final 45 minutes meandered through a steep valley with very narrow roads and many tight twists and turns. The driver was certainly earning his money today, that is for sure.

The coach stopped at the trailhead and everyone got out and started walking immediately as there were already quite a few people en route ahead coupled with the excitement of the occasion. It was a warm day with clear blue skies and I was feeling good, I pushed on and quickly overtook many groups of people. The path/track started off quite wide as it followed a river allowing some dare I say more lazy people to continue further by car or 4×4. Thankfully this option soon ended as the track turned into several smaller trails as it headed through stunning green meadows before climbing quite steeply uphill through lush forests.

Still feeling strong I pushed onwards and upwards. I paused to ask a group of lads if they could take my picture, surprising they replied in English and we were to go on to spend the rest of the day together. We started talking while walking, they were three 18-year-old students, one Russian and the other two were local Macedonian’s. It really made the climbing quicker and seem easier and as the hours passed by we covered many topics from religion to politics and of course football. They told me about their local history and Macedonia’s independence while all the same time we were ascending higher and higher.

Neither of the Macedonian lads had climbed their country high point before and I used this to motivate them when the final push for the summit came into view as their speed had decreased significantly. They sat down for a break but I just couldn’t resist and said I would meet them on the top, Adrenaline had taken over and I flew up the last section to the summit in no time. A swarm of people were already gathered, I took photos and congratulated the lads when the arrived a few minutes later. We celebrated on the highest point of Macedonia and Albania with shots of a strong traditional liquor. The views were extensive but it was kind of diminished by the sheer number of people.

That being said, Korab isn’t just a small easy hill and these people were all ages and levels of fitness, ranging from super fit runners to many old and slow people. For me, the fact that all of these people were here on behalf of their countries independence speaks volumes! I think it would be great if more countries around the world celebrated their independence or national day by climbing to their highest point.